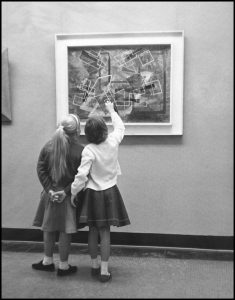 NEW ORLEANS–The New Orleans Museum of Art (NOMA) announces a major fund and pledged endowment by Del and Ginger Hall of Chicago, Illinois, in support of the NOMA photography department. The fund will support and augment an ambitious set of exhibitions and programs in the department of photographs over the next five years, while the endowment will provide a foundation for the department’s activities in perpetuity. NOMA’s current exhibition New Photography: Create, Collect, Compile is the first endeavor supported in large part by the Halls’ contributions.

“Del and Ginger’s incredible generosity will help grow what is already one of NOMA’s greatest strengths: our photography program,” says Susan Taylor, Montine McDaniel Freeman Director. “By providing both immediate and long-term support, Del and Ginger are ensuring the present and future success of that program.”

An Emmy Award-winning news cameraman and film editor, Del Hall was born and raised in New Orleans. He began his career with WWL-TV and later went on to work on national and international assignments with CBS. With Ginger, Del ultimately founded a video production company in Chicago while simultaneously taking still pictures. Both he and Ginger remain devoted to the medium as a means of expression, documentation, and a way to look at and understand the world. Their work is guided by their belief in the power of photography as a tool for social change, especially in the hands of young people.

Del’s relationship with NOMA began years ago as a young boy when he would visit the museum.  Over the years he has returned frequently, as a visitor, donor, and photographer: pictures that he produced of students visiting the museum in the 1960s are in NOMA’s permanent collection. The Halls’ connection to NOMA was recently renewed when, during a visit to the museum, Del and Ginger asked to meet with the Curator of Photographs, Russell Lord. “As anyone who knows them would testify, Del and Ginger are instantly charming, thoroughly generous, and great humanists,” said Lord. “Within the first few minutes of that chance encounter, it was clear that their devotion to both photography and people aligned perfectly with our department’s mission to tell an inclusive story about photography.” In the time since, the Halls have become regular attendees at museum events and are close with many museum staff members.

Del’s storied career is chronicled in Richard Campanella’s The Photojournalism of Del Hall: New Orleans and Beyond, 1950s-2000s (Baton Rouge: LSU Press, 2015). Segments produced by Del and Ginger have been introduced to the world by such esteemed figures as Walter Cronkite and Dan Rather. Their work took them around the world, but it is Del’s hometown of New Orleans that inspired the Halls’ strong sense of loyalty. Together, they recognized the impact that this important gift could have for the people of New Orleans.

The New Orleans Museum of Art, founded in 1910 by Isaac Delgado, houses more than 40,000 works of art encompassing 5,000 years of history. Works from the permanent collection, along with continuously changing special exhibitions, are on view in the museum’s 46 galleries Thursday through Sunday, 10 AM to 6 PM. The adjoining Sydney and Walda Besthoff Sculpture Garden features work by more than 90 sculptures, including works from several 20th and 21st-century master sculptors. NOMA’s Besthoff Sculpture Garden is open to the public Wednesday through Sunday, 9:30 AM to 5 PM. The New Orleans Museum of Art and the Besthoff Sculpture Garden are fully accessible to handicapped visitors and wheelchairs are available from the front desk. Museum admission is free on Wednesdays for Louisiana residents, courtesy of The Helis Foundation. Children 12 and under receive free admission. Teenagers (ages 13-19) receive free admission courtesy of The Helis Foundation.  Subscribe to NOMA’s newsletter.

NOMA’s Department of Photographs cares for and interprets a collection of over 15,000 works, ranging from the 1840s to the present and including examples made on all seven continents. It has grown substantially recently with the additions of the Dr. Russell Albright Collection (a contemporary photography collection of over 350 works), and the promised bequest of Tina Freeman (1,300 works spanning the history of photography).