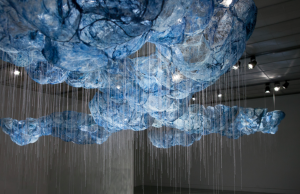 The New Orleans Museum of Art will present Mending the Sky this fall as the museum’s first major exhibition following New Orleans’ months-long shutdown due to the COVID-19 pandemic. On view October 10, 2020 through January 31, 2021, the exhibition will bring together ten artists’ projects that respond to a world turned upside down. Working across the fields of art, animation, and performance, the artists work to shift conversations, challenge entrenched views, and subvert the established order.

Inspired by one of the works in the exhibition, Mending the Sky takes its title from a Chinese fable in which a rip in the sky causes the earth to split open, bringing floods, fires, famine, and disease—until a goddess comes to take on the arduous task of mending the broken sky. Each of the artworks in the exhibition help give shape to the aftermath of calamity, building towards a more equitable future by helping to envision the new world that might rise in the wake of crisis. Premiering several major new acquisitions by both locally based and internationally recognized artists, Mending the Sky will bring a global perspective to issues currently affecting the city of New Orleans, the United States and the world. With roots in Brazil, China, the Dominican Republic, Jamaica, Vietnam, India, and the American South, each of these artist projects are also acts of world-building that offer a glimpse of a future that cannot yet be seen.

“Mending the Sky touches on the many complex ideas that we, as a community, have been challenged to address in the times of COVID-19,” says Susan Taylor, Montine McDaniel Freeman Director at NOMA. “This is an exhibition about loss and uncertainty, but also creates space for recovery, healing, and hope.”

“Mending the Sky focuses on artists who consider the crucial actions of care, healing and coming together,” says exhibition curator Katie A. Pfohl. “Each of them recognizes the hard work of recovery: that we must remedy the challenges of the past and address present issues to forge a new path forward.”

The exhibition begins with artist Beili Liu’s installation After All/Mending the Sky, in which raw silk clouds and dangling needles picture a sky in the act of repair. Firelei Báez’s painting the trace, whether we are attending to it or not (a space for each other’s breathing) overlays a ciguapa—a female creature from Dominican folklore—onto architectural plans of New Orleans, overwriting the divisive histories the map represents. Diedrick Brackens’s weaving If you feed a river mines the technique of weaving as a potent metaphor for new ways of imagining individual and cultural identity, incorporating influences drawn from European tapestries, West African textiles, and Southern quilting to explore issues surrounding gender, race, and sexuality. Heidi Hahn’s painting Burnout in Shredded Heaven 10 pictures two female figures, loosely based on poses of women from art history, in full possession of their own bodies and emotions, denying their viewers easy access to the world they inhabit. In A Sense of Memory, Ana Hernandez combines found wood, gifted objects, cast glass, and metal, finding in the patterns and forms nature models for greater harmony and balance between nature and people. Baseera Khan’s Braidrage is a video performance that explores the experience of overcoming trauma, based around a rock-climbing wall made from resin casts of parts of Khan’s body that the artist herself climbs. Thao Nguyen Phan’s three-channel video Mute Grain combines film and hand-drawn animation to tell the story of the death of a young woman named August during a famine in Vietnam, who haunts the landscape as a hungry ghost. In Jamilah Sabur’s video installation Un chemin escarpé / A steep path, the artist embodies a shape-shifting figure that communes with sites in the Caribbean to reimagine the surrounding landscape. Brazilian artist Clarissa Tossin’s Where the River Meets the Sea weaves together imagery from the world’s four largest rivers—the Amazon, the Nile, the Yangtze, and the Mississippi. Lorna Williams’s intricate sculptural assemblage of roots, everyday materials and cast plaster teeth, Lore, visualizes how our ancestors speak to us and through us: how our roots help form our identities and ways of being in the world.

Jazz-based cellist, singer, composer and improviser Helen Gillet performs her own eclectic mix of French, contemporary jazz, North Indian, blues, and classical styles. For Mending the Sky, she will create a series of concerts in which she will responds musically to the artists and ideas explored in the show that will be performed in the gallery and streamed online.

Freedom at the Mat is a multi-disciplined wellness experience integrating mindfulness, meditation, yoga asana, journaling, and verbal affirmations. Designed to reconnect women with their innermost dreams and inner divine while also releasing stress and strengthening their bodies and minds, this self-care experience will be broadcasted from NOMA’s galleries and will be available virtually to online audiences.

In partnership with the New York City non-profit art and performance space Participant, Inc., NOMA will present a conversation between Mending the Sky artist Baseera Khan and activist Patricia Okoumou, who in 2018 climbed the Statue of Liberty to protest the United States government’s detention of migrant children.

NOMA invites the New Orleans community to a virtual preview of Mending the Sky on Friday, September 18, led by exhibition curator Katie A. Pfohl and Community Engagement Curator Nic Brierre Aziz. Registration information will be available in advance of the event at noma.org.

Visit the exhibition listing to learn more about Mending the Sky.