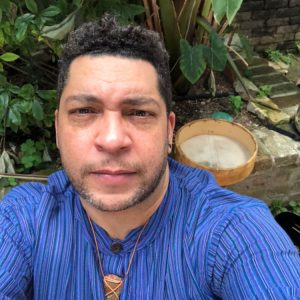 Joseph is a native of Bulbancha (Choctaw for “place of many tongues,” aka New Orleans) from the Faubourg Treme, the oldest free people of color neighborhood in the country (predating the US itself). This neighborhood of Gens de Couleur Libres is a tri-racial ethnic blend comprised of Native Americans, Europeans, and African ethnic Creoles who speak a lingua franca known as Kouri Vini as well as Colonial Louisiana French.

A bookbinder by trade—trained at the oldest bookbindery in the US (Harcourt, Boston)—Joseph is also a visual art alum of NOCCA, as well as a member of the oldest early music ensemble in the America, New Orleans Musica da Camera (founded in 1965, as was Joseph).