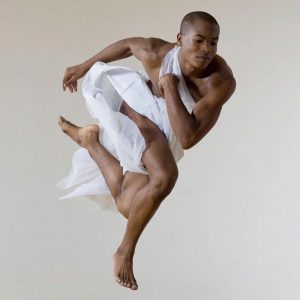 In his early years, Mr. Spots trained locally at the New Orleans Dance Academy, NORD/NOBA, and the Schramel Conservatory. In the disarray that followed Hurricane Katrina, Mr. Spots applied for and was awarded a scholarship to study ballet at the Walnut Hill School for the Fine Arts in Massachusetts where he trained under director Michael Owen for three years. During the summers, he also studied at the Washington School of Ballet, Joffrey Midwest, and the Joffrey Ballet School in New York City.

Upon graduating from Walnut Hill, Mr. Spots was granted a fellowship at the Ailey School in New York where he ultimately joined Ailey II, a professional company that gave him his first opportunity to perform professionally in cities throughout the United States and Europe.

His career has been diverse, appearing in a variety of commercials, films, and print media and was, most recently, featured in America—winner of the 2019 Sundance Film festival award for best short. The film, along with an original piece choreographed by Mr. Spots entitled Black Magic, debuted at the New Orleans Museum of Art in late 2019.

When not performing or choreographing, Mr. Spots teaches ballet to pre-professional students at the New Orleans School of Ballet and has his own project based company Magnolia Dance & Company. He is thrilled to be joining the staff at NOCCA for the 2020–21 school year.