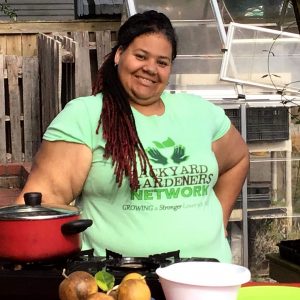 Courtney Clark is a native of the Lower 9th Ward of New Orleans and has worked as an artist, school teacher, community food justice organizer, mental health advocate, throughout her eclectic career. Between 2015 and 2020, Clark served as Programming Coordinator for Backyard Gardeners Network (BGN), spearheading its Food As Medicine program—a 10-week health and nutrition workshop series for adults which focused on food as a primary source of healing. BGN (@bgnnola) is a Lower 9th Ward–based nonprofit organization whose mission is to sustain and strengthen the historically self-sufficient and deeply rooted community of the Lower 9th Ward of New Orleans. The premature death of her mother due to diabetes and the diet-related diseases that plague her community have fueled her passion for food justice and have inspired her to design a cookbook highlighting healthy New Orleans cuisine. In 2016, Clark was selected to serve as a U.S. delegate by Slow Food USA for the Terra Madre del Gusto Food conference in Turin, Italy. NOLA.com recognized her as an Everyday Hero in 2017 and JJill and Food Network as an Inspired Woman for her work in 2020. Clark was chosen by The Greater New
Orleans Foundation as an Emerging Leader in 2017.

Clark is the mother of 16-year-old twins with autism and has worked for 26 years in mental health advocacy. She has traveled throughout the country to fight on behalf of parents of children with mental health issues. She has collaborated with Friends and Families of Louisiana Incarcerated Children (FFLIC) and New Orleans Community Accountability Project (NOCAP). She served as parent representative at the National Mental Health Convention in 2014 and a panelist at the Yale School of Education in 2010.

Clark is an alumnus of YA/YA Inc., a youth arts program which educates youth in arts and entrepreneurial skills. Clark has worked for over 30 years to continue the success of the art program, mentoring young artists and sharing her knowledge of art and business. She has led workshops on starting art programs and consulted existing programs in Anniston, AL, Nashville, TN, and Marin County, CA.