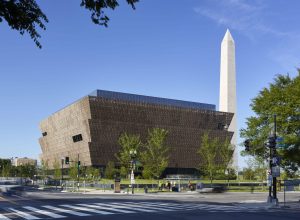 The National Museum of African American History and Culture opened in 2016 as the nineteenth branch of the Smithsonian Institution.

In partnership with the Louisiana Architecture Foundation, NOMA will screen the 2017 documentary The Black Museum on June 14 at 7 pm as part of Friday Nights at NOMA programming and a sneak preview of of the 2019 Architecture & Design Film Festival. (Watch a preview trailer at this link.) A panel discussion will following the screening.

The Black Museum, directed by Oliver Hardt, takes viewers on a journey through the spectacular National Museum of African American History and Culture in Washington, D.C., the nineteenth and newest addition to the Smithsonian complex of museums on the National Mall. Through 100,000 square feet of exhibition space spread across eight levels, the museum explores America’s history and culture through the lens of the African American experience. Interviews with the project’s key figures provide detailed insight into the challenges and conflicts during the formative stage of the museum and its overwhelming success during the first year of operation.

Here are five facts about the museum to consider in advance of watching the documentary.

The museum blends design elements that are symbolically African and African American. The lead designer, Tanzanian-born British architect David Adjaye, says, “This is a museum where the container and the content are one.” His concept for the museum was selected in 2009. The five-story building is inspired by the crown motif of Yoruba sculpture. The exterior is wrapped in a metal lattice that resembles the ironwork traditionally forged by African Americans, many enslaved, in cities such as Charleston and New Orleans. According to Architizer, “The architects studied iron railings and façade ornaments from South Carolina and Louisiana before selecting a historic grille as the basis of their design. They then used digital modeling software to abstract the pattern, giving it a contemporary flair.”

David Adjaye said he envisioned the museum evoking a sense of “praise.” He told Smithsonian Magazine, “It’s the idea that you come from the ground up, rather than crouching down or leaning. The form of the building suggests a very upward mobility . . . This is not a story about past trauma. For me, the story is one that’s extremely uplifting, as a kind of world story. It’s not a story of a people that were taken down, but actually a people that overcame and transformed an entire superpower into what it is today. The sacrifices of the African-American people has made America better.”

When it opened in September 2016, the museum topped the 1 million mark in visitors  in just over four months, breaking all records for any of the museums in the Smithsonian system. The museum’s “dwell time,” the length of time a visitor stays in a museum, is unparalleled—averaging six hours or more on weekends, compared to 75 minutes to two hours for most museums.

When the museum was authorized by Congress in 2003, it had no collection. After years of work to populate its archives, the museum has collected more than 36,000 artifacts and has nearly 100,000 charter members.

Exhibits in the National Museum of African American History and Culture span more than four centuries, from the early slave trade to the Obama era. Many artifacts are from Louisiana, including a deed of sale for two men auctioned in a New Orleans slave market, a chef’s jacket an cookbook from renowned New Orleans restaurateur Leah Chase, clothing and shoes from R&B legend Fats Domino, an exhibit about the Deacons of Defense self-defense group from 1960s-era Bogalusa, a helicopter rescue basket used in the aftermath of Hurricane Katrina, a painting by Clementine Hunter, and a guard tower from Camp H at the Louisiana State Penitentiary at Angola.