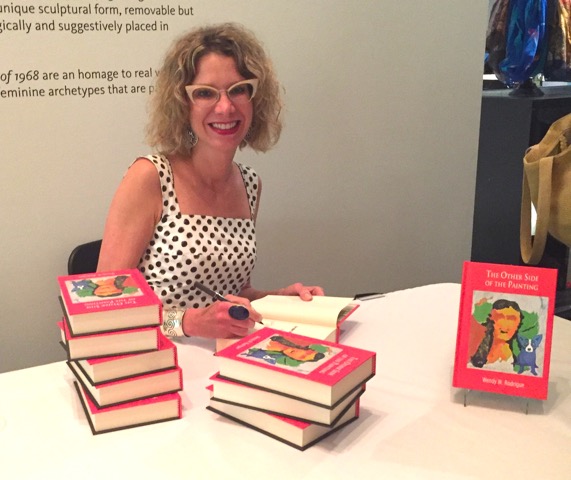 About Wendy Rodrigue and The Other Side of the Painting

Wendy Rodrigue was born on a military base and raised in Fort Walton Beach, FL.  She attended Trinity University in San Antonio, TX, majoring in Art History and English, followed by European Art and Architecture in Vienna, Austria, and graduate school at Tulane University in New Orleans. She worked for the Rodrigue Gallery in New Orleans and later Carmel, Ca., beginning in 1991, and married George Rodrigue in 1997. They lived in Lafayette, La. before moving in 2001 to New Orleans and Carmel. She has written guest columns for publications including Gambit, Country Roads Magazine, and Louisiana Cultural Vistas.  She has also worked on Rodrigue exhibitions and publishing projects as needed and lectured frequently on his art and Louisiana history. As of 2016 she remains involved in Rodrigue Gallery operations, the George Rodrigue Foundation of the Arts, and, primarily, in preserving and enhancing Rodrigue’s artistic legacy. Her first solo book, “The Other Side of the Painting” (UL Press), was published October 2013.

“I worked on this book for four years,” explains Wendy Rodrigue.  “It’s a project George encouraged from the beginning, and it’s full of his quotes and our stories, including the history behind many of his best-known Cajun and Blue Dog paintings, as well as his recollections of New Iberia, art school, and his early years as a professional artist in Lafayette.  The book’s design is George’s alone.  He chose the cover, size, interior images and layout.”

Douglas has published extensively in multiple formats including books, monographs, academic journals, design critiques, book chapters and essays, biographical summaries, and critical reviews, and his writings have appeared in print and electronic media in America, Canada, the European Union, and China. His research focus, American landscape history, draws upon art history and agricultural, horticultural, and garden literature as sources of new information about evolving environmental awareness, design theories, garden styles, workers, and horticultural commerce. Among his books are Steward of the Land (2014), an annotated collection of the writings of Thomas Affleck, a 19th century Scotsman who immigrated to American and wrote extensively about horticultural matters in American publications; Public Spaces, Private Gardens A History of Designed Landscapes in New Orleans (2011), recipient of the Kemper and Leila Williams Prize for Louisiana history by the Louisiana Historical Association in 2012, and an Honor Award from the American Society of Landscape Architects (2013); Gardens of New Orleans (2001); Hillside Gardens (1987); and Garden Design (1984). In 2012 he inaugurated Reading the American Landscape series with LSU Press; the most recent book (2116) in the series is Afton Villa The Birth and Rebirth of a Nineteenth-Century Louisiana Garden by Genevieve Trimble.

Douglas has curated two local ground-breaking exhibitions: “In Search of Yesterday’s Gardens: Landscapes of 19th-Century New Orleans” at The Historic New Orleans Collection (2001) and “Plants of the Louisiana Purchase: New Orleans Horticulture, Jefferson’s America and Napoleon’s France” for the New Orleans Botanical Garden, City Park (2003). He was instrumental in securing two traveling exhibits shown at LSU, “The Landscape Architecture of Dan Kiley” (2015) and “The New American Garden” (2016), and in developing public events associated with the exhibits.

In 2016 he was named to the Council of Fellows of the American Society of Landscape Architects, the professional organization’s recognition of “exceptional accomplishments over a sustained period of time.”

About The Salt Wives