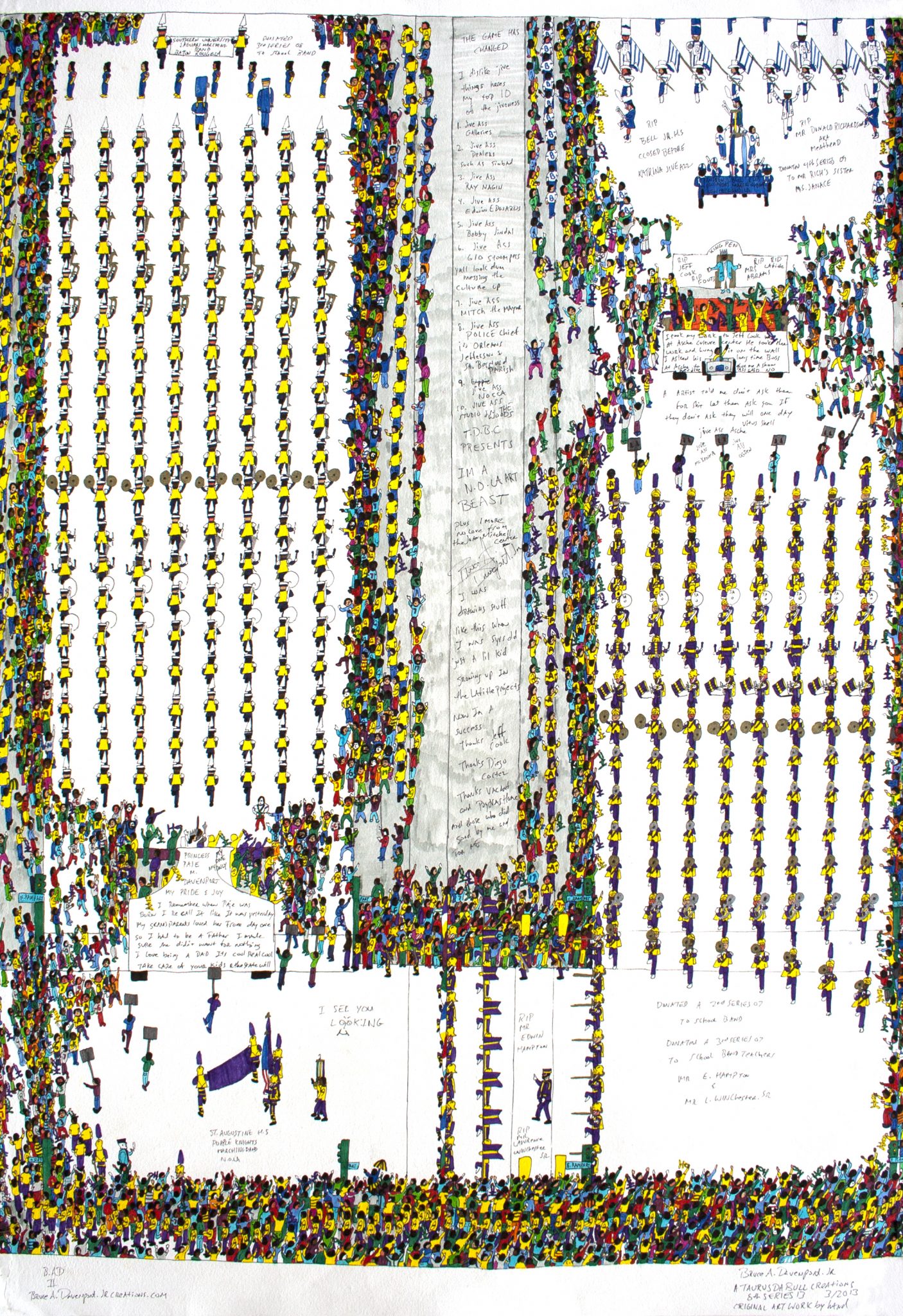 In conjunction with the exhibition Pride of Place: The Making of Contemporary Art in New Orleans, artists represented in the collection of gallerist Arthur Roger will discuss their careers and influences. Deeply rooted in New Orleans culture, Bruce Davenport, Jr., also known as Dapper Bruce Lafitte, documents the world around him in his art works. Internationally acclaimed for his vivid depictions of New Orleans’ second-lines and parades, Lafitte is a self-taught artist who lives and works in the Lower Ninth Ward.

ABOUT RON BECHET AND “FOR MY FATHERS”

Ron Bechet is a visual artist who works in the traditional mediums of drawing and painting. Bechet’s work has been exhibited nationally and internationally, culminating in a solo show in the summer of 2015 at the Acadiana Art Center in Lafayette, Louisiana called “Sense of Place” in which he examined the visual culture of the African Diaspora. He has collaborated in pieces and exhibitions with John Scott, with whom he shared studio space for many years. His work has been included in an exhibition curated by Edward Lucie-Smith in London in 1996 called “The Louisiana Story–The Next Generation,” the imago mundi catalogue for the “Reparation: Contemporary Artists from New Orleans” exhibition, and the P.3 + McKenna Museum of African American Art site exhibition in New Orleans. Most recently, his work was exhibited at the Ogden Museum of Southern Art in New Orleans in the “Tina Freeman: Artist Spaces” exhibition. He holds an MFA from Yale University.

Bechet and special guests will present “For My Fathers,” a musical and dance performance inspired by Bechet’s 2013 charcoal-on-paper drawing of the same name that is on display in the exhibition NEW at NOMA: Recent Acquisitions in Modern and Contemporary Art. The performance piece was originally commissioned for the 2013 The Art of Music showcase at the New Orleans Center for Creative Arts (NOCCA). Choreographers/collaborators include Troi Bechet, Nicole Boyd Buckels, Barbara Hayley, Maritza Mercado-Narcisse, Beverly Trask, Cyrus N. Buckels, and Tyger Hammons. Music, performed by cellist Jee Yeoun Ko and percussionist Seguenon Kone, includes Tania León’s “Four Pieces for Solo Cello” (1983), Movement II “To My Father,” and Kone’s original work on percussion.

Troi Bechet is a singer, writer, actor, activist and a life long resident of New Orleans. She is the CEO of Center for Restorative Approaches and the wife of artist Ron Bechet; Nicole Boyd Buckels, a native of New Orleans, is dancer and choreographer and long-time faculty member of Lusher Charter High School and Tulane University’s Newcomb Dance Program; Barbara Hayley is professor of dance and dance coordinator in the Department of Theatre and Dance/Newcomb Dance Program at Tulane University; Seguenon Kone, a native of Côte d’Ivoire, is a percussionist and choreographer, who has called New Orleans home since 2008;  Maritza Mercado-Narcisse is artistic director of Narcisse/Movement Project (2014) and will present her award winning choreography, “I Was Told There’d be Cake” for Marigny Opera House Christmas Cocktails in December; Beverly Trask is actor, choreographer and performer, a founding member of New Orleans Dance, and Professor of Dance at Tulane’s Newcomb Dance Program since 1979; Dr. Jee Yeoun Ko is a native Korean cellist and artist teacher/chair of classical instrumental department at NOCCA. She envisioned and curated the original Art of Music at NOCCA.

Dr. Jee Yeoun Ko, a native Korean cellist, began playing piano at age 5, and won first prize in the Young Artist Competition in Seoul, South Korea, at age 7. She holds a doctoral degree in cello performance from Louisiana State University, and has held positions in the Baton Rouge and Acadiana symphony orchestras. Since 2009, Ko has served as chair of the New Orleans Center for the Creative Art’s classical instrumental department.