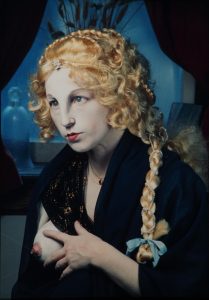 NEW ORLEANS–Noted radiologist and art collector Dr. H. Russell Albright (1934-2017) bequeathed his extensive and important photography collection to the New Orleans Museum of Art (NOMA), and left a fund to create an endowment in support of the museum’s Department of Photographs. Dr. Albright had a long and significant relationship with NOMA, filling many roles over the span of 30 years, ranging from Trustee to longtime Fellow.

“Russell Albright was generous and influential in his involvement with the museum during his lifetime, and his devotion to collecting served as a model for others in our community,” says Susan Taylor, Montine McDaniel Freeman Director of NOMA. “His collection will serve as the core of contemporary photography at NOMA and the accompanying endowment fund will ensure that his legacy at the museum will live on.”

Albright was born in Little Rock, Arkansas, and attended the University of the Ozarks and the University of Arkansas Medical School. In the 1960s, he moved to New Orleans, where he did his residency at Ochsner Foundation Hospital, then ultimately joined his former radiology resident colleague from Ochsner, Abner M. Landry, Jr. M.D., and together founded Landry-Albright Radiology Group, Inc. at Mercy Hospital in 1968. Along with long-time partner Michael Myers, Albright began collecting contemporary photographs in 1988. By 1991, he had amassed a collection vast enough to produce a major exhibition at NOMA, entitled Altered Truths: Contemporary Photography from the Michael Myers/Russell Albright Collection. A second exhibition, titled Recent Appearances, comprised of a completely different selection from the collection, followed in 1998.

Dr. Albright always intended for his collection to permanently reside at NOMA. For that reason, he often collected works that would allow NOMA to tell a fuller history of photography. As he put it, he sought out photographs that “I don’t necessarily love, but that I respect, that I feel are important, that should be available to people in this community, and that should be preserved.”

With his bequest to NOMA, Albright gave almost 400 works to the museum, more than 350 of which were photographs. Of these, the majority are by acknowledged contemporary masters such as Cindy Sherman, Lorna Simpson, Nan Goldin, and Thomas Ruff, and the collection also includes a smaller group of excellent prints by earlier twentieth century artists such a Man Ray, Brassaï, and Doris Ulmann. Additionally, substantial and generous works were gifted to the modern and contemporary art department, the decorative arts department, and the African art department.

“Russell Albright’s eye was incredibly discerning, a trait that is visible across his collection, be it in his selection of a rich modernist print from the 1930s or a powerful contemporary photograph” says Russell Lord, NOMA’s Freeman Family Curator of Photographs. “Albright never shied away from adventurous or even controversial images, amassing a collection that is as critical as it is beautiful.”

In addition to the gift of works of art, Dr. Albright left a fund to be devoted to the photography department’s activities. As with the collection he bequeathed, the fund will have a significant impact on NOMA’s presentation and interpretation of the history of photography in perpetuity.

The New Orleans Museum of Art, founded in 1910 by Isaac Delgado, houses more than 40,000 works of art encompassing 5,000 years of history. Works from the permanent collection, along with continuously changing special exhibitions, are on view in the museum’s 46 galleries Thursday through Sunday, 10 AM to 6 PM. The adjoining Sydney and Walda Besthoff Sculpture Garden features work by more than 90 sculptures, including works from several 20th and 21st-century master sculptors. NOMA’s Besthoff Sculpture Garden is open to the public Wednesday through Sunday, 9:30 AM to 5 PM. The New Orleans Museum of Art and the Besthoff Sculpture Garden are fully accessible to handicapped visitors and wheelchairs are available from the front desk. Museum admission is free on Wednesdays for Louisiana residents, courtesy of The Helis Foundation. Children 12 and under receive free admission. Teenagers (ages 13-19) receive free admission courtesy of The Helis Foundation.  Subscribe to NOMA’s newsletter.