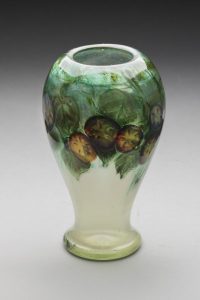 In May 2020, NOMA’s learning and engagement department established an “Art Inspires” short story competition that asked contestants to craft a fictional tale based on selections from the museum’s permanent collection of decorative arts. Colette won a prize in the youth category for this story, titled “To My Beloved,” and inspired by a glass vase, circa 1915, from Tiffany Studios.

It was a slow day at home for the Samuel twins; their mom was still at work because she was a doctor. Mark woke up around ten in the morning. He had nothing to do because their school cancelled because of the pandemic, and the school felt that it was not necessary for online learning. His sister, Julia, laid fast asleep on the couch after binge watching The Office all night. Mark was bored out of his mind, so he planned a prank on his sister. He thought out his master plan through; he was a little scared that she might bump into the coffee table behind her. Mark decided that everything was going to be alright, and he carried out his plan.

He leaned right in front of her face and screamed, “HEY JULIA, MOM’S HOME!!!!”

Julia jumped up; she panicked and attempted to collect her thoughts. The table was in disarray; she used her arm as a mechanism for scooping the huge pile of crumbs. She looked up at Mark; he laughed and laughed his head off.

Julia thought to herself, “For someone who said mom was coming, he looks pretty calm.”

Then it dawned on her, he pranked her. She felt like a fool; she scolded herself and thought that she of all people should have known better. Julia was red with fury; she wanted an opportunity to teach Mark his lesson. He joked about the thing that didn’t let her sleep at night; he made fun of their mom coming home. The “thing” that worried her was the idea of their mom coming home to an unclean house after long shifts at the hospital. She always wanted for her mom to be happy; unlike Julia, Mark seemed not to care. That was the tipping point for her; a sense of rage took hold of her. An unknown force grabbed a hold of her, and she kicked the table. As if everything was in slow motion, the table nearly crashed into Mark’s shin, but he stepped to the side. The table veered opposite of them and crashed into the floor. The beautiful ocean blue vase cut through the air; Julia jumped over her brother in order for an attempt to catch it, but it slipped right through her hands. The vase shattered into thousands of pieces. The Samuel twins started and each other for the longest time; the accident sucked the air right out of the room. Julia and Mark knew that their mom adored the vase; breaking this vase was like breaking her heart.

The small, blue vase had a history for the small family. Their grandfather, Anthony, gave it to his wife, Caroline when he left for Vietnam. It was his last gift that he bought before he died. He had died while serving in the military; a freak accident had occurred at the base that the military wished not to disclose. Angela, their mother, was not born yet, and she would never have the chance to meet her father. Their mom kept the vase; it was always there for her. It reminded her of the good old days when her parents were around; the days their grandmother took their mother to the beach. The shells around it reminded their mom of when she used to build sandcastles with their grandmother. The vase in an odd sense became part of their family after their grandmother had been diagnosed with Alzheimers. The vase acted as a foundation for their mother’s emotions toward her parents; breaking the vase was one of the worst things that could have ever happened to the family.

The shock of breaking the vase wore off; they decided that the best thing was to clean their mess. They put in four grueling hours of tidying the house in order for the wrath of punishment to be softened. Mark scrubbed the floors and passed the vacuum. The hum felt like the world was slowly but surely coming to an end. Julia scampered around the floor and swept up the shards of glass; she noticed a small envelope in the middle of the shards. It seems that this letter was the core of the vase.

Julia asked, “Do you know if mom kept anything in the vase?”

Mark noticed that their mom pulled into the driveway; Julia quickly shoved the letter into her jacket. Their mom entered the house. It was the moment of truth; would she notice her most prized possession was missing?

“Good!” they chimed together.

Their mom took off her shoes; she proceeded to the kitchen. A glimmer of light on the floor caught her attention; their ploy was up.

Julia and Mark nodded their heads with guilt, and their mother asked them to help cook dinner. Angela was too upset to talk to her kids; she ordered them to go immediately to bed after dinner. As soon as they finished eating; they took the walk of shame up the stairs.

The next morning, Julia and Mark cooked an apology breakfast for their mom. Julia asked if their mom knew anything about a letter in the vase. Angela shook her head. Julia cautiously handed the letter; their mom opened the letter and gasped out a lot.

“What is it Mom?” asked Julia.

“It’s the missing letter from your grandfather to your grandmother!” exclaimed Angela.

She explained that the final letter went missing shortly before their grandmother lost her memory. She heard stories about the letter, but she never saw it. Her grandmother told her that ended with their customary greeting. Angela rushed ahead to the ending.

“To my beloved wife Carol, from Tony,” she whispered under her breath.

Angela hugged her children tight and sobbed tears of joy. The twins were finally glad to see their mother happy once again.