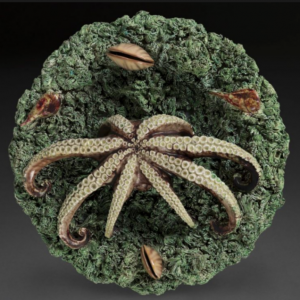 In May 2020, NOMA’s learning and engagement department established an “Art Inspires” short story competition that asked contestants to craft a fictional tale based on selections from the museum’s permanent collection of decorative arts. Parvanthy Anantnarayan won a prize for this story, titled “The Tentacles of Love,” and inspired by a glazed earthenware “Palissy ware” plate with Octopus by Jose Alves da Cunha.

The fine clay dust pooled on the rough boards of the workshop’s wooden floor under the edge of Emilio’s broom. He swept the detritus of the day’s work at the studio, while a beam of reddening sunlight streamed in through the open door.

“Remember, Emilio, on Monday, we cast the molds.”

His back turned, the man at the door raised his hand to bid goodbye as his sprightly frame stepped into the street.

“Adeus, Senhor!” Gonçalo said hurriedly, following Senhor Alves da Cunha to the door and closing it behind the retreating figure. Turning, he grinned at Emilio while pulling his clay smeared apron over his head, “I thought the week would never be done! Off to the tavern, then!”

“When I am finished,” Emilio replied laughing, “hold your horses, Gonçalo!”

The two young men made their way to the town square. Against the panes of wavy glass, their figures undulated as they walked across the cobblestones: past vendors, a baker, and the shops wrapping up their wares. Entering a low door framed by wisteria, they sat at two stools in the tavern, placing orders for mussel stew and wine.

The wine arrived in a thick ceramic jug, and after pouring their glasses, Emilio trailed his fingers over its painted surface.

“He wants to make a mold for an octopus,” said Gonçalo, gulping down a flush of the red liquid and shaking his head, as if in disbelief.

“Yes, it’s hard, but he’s right. An octopus is a study in shape and texture. It would be a coup if he nails it—”

“What do you mean, if he nails it?” Gonçalo interjected, “It’s we apprentices who do the tough work and he gets all the accolades!”

“Maybe so. He is the master, though and we signed up for this, remember?”

“Signed up to work ceaseless hours at little or no pay? Yes, I remember!”

“Patience, Gonçalo!” Emilio placed a steadying hand on his friend’s arm, “there will be a time when we are masters of our own studio. That day will come–”

“That day will come too late!” Gonçalo snatched back his arm, irate. “We’ll be too old to enjoy the fruits of our labor! You’ll have to bid goodbye to any chance of courting Senhorita Alvarez…”

“Ah, our meal is here!” Emilio cut him off, relieved to eat rather than talk. He did not want to speak of his prospects with Senhora Alvarez. Transported as he was by the very thought of her beautiful face, he was equally devastated by the fact that he could not tell her of his wish to make her his. Not until he could make a living that would be enough to support a family, a living worthy of a nobleman’s daughter.

Firmina Alvarez sat at the same pew at the Igreja do Espirito Santo each Sunday. The old walls and hushed alcoves of the church were a soothing balm to her increasingly worried mind. She lowered herself into the pew, grateful for a moment’s respite from reminders that, with each passing day, her tenure in the town of Caldas da Rainha was shortened, and the purse strings extended to her by the royal family would soon be gone. Firmina had been an orphan for five years now, and the years of her father’s chivalrous service to the crown when he was alive had granted her a brief interlude of security. She was now an órfãs d’el-rei, an “orphan of the king”, and this meant that she would soon be sent to Goa, India, to meet and marry a Portuguese man she had never set eyes on before. A shiver ran down Firmina’s spine, despite the layers of silk and heavy petticoats under her Sunday gown. Reaching for the missal as Padre João began the reading for mass, she opened to a page containing an envelope addressed to her. Surprised, she gingerly picked up her handkerchief and extricated the letter under cover.

Who could it be from? How could they have known she’d find it here?

A few pews away, Emilio looked up from his folded hands and saw Firmina fold his letter into her handkerchief. His heart skipped a beat.

It had been several weeks since that Sunday, and Emilio hadn’t heard a word. Long days and nights passed at the studio, casting and recasting the curled boneless bodies of octopi into molds, sliding clay through sieves to create a grass-like pattern on the platter, glazing and reglazing to create a luminous bed of green. Finally, the platter emerged, stunning and life-like, a small tidal pool that seemed so real as to startle the viewer.

“Very pleased,” Senhor Alves da Cunha boomed in a deep voice, holding it up to shimmer in the light. “I am very pleased, indeed. And I am sure she will be as well.”

“Senhorita Alvarez. Do you know of her? She is to marry in Goa, and has purchased this platter as a part of her dowry. A handsome choice, if I should say so myself…”

Emilio blanched. So she was leaving.

That evening, he swept the studio alone. Nearing the worktable, he saw the mold lain open, the splayed shape of the octopus embedded within. Like the memory of an eight-pointed star that had long since disappeared, it seemed cavernous and dark. Emilio ran a weary finger over the space that held once-hungry suckers. Then, with what seemed like the might of ten men, he hefted the clay blocks over his head, and brought them crashing to the wooden floor.

Around him the tentacles, now mangled, fractured and shattered, turned into dust.