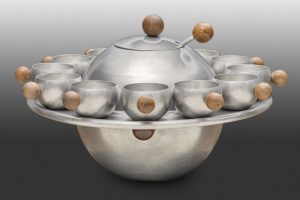 In May 2020, NOMA’s learning and engagement department established an “Art Inspires” short story competition that asked contestants to craft a fictional tale based on selections from the museum’s permanent collection of decorative arts. Katy Simpson Smith won the grand prize for this story, titled “Saturn,” and inspired by Russel Wright’s “Saturn” punch bowl service.

She set the table for twelve. The doctor and the etymologist next to each other—both were blameless and had only been invited to keep things sedate. (Related to the Latin sedere, “to sit.”) Her father, of course; her Catholic great-uncle, who blessed even his almonds before he indulged; and her two older brothers, neither of whom had taught her about table settings, not about the pickle fork or how to ring glass to test for crystal. She’d made the napkins out of a dress she’d once bought for a wedding. The kitchen smelled of cumin seed frying in butter, and from the icebox, the heavy promise of peaches.

The punch bowl was empty when she set it in the center of the table, and full when the sun turned all the clouds and curtains lavender. Two dozen cubes of ice, and the silver base of the bowl began to sweat. She washed her hands well before she touched anything else.

The roller skater arrived first, gliding past the obstacles she’d scattered in the hallway. He moved to a constant Barry White beat. When he snaked his arm around her waist, she spun away, and he smiled like he’d invented the dance.

Then the man whose job was living in a bus, who when you asked what he did for a living, said, “I see America,” leaving you no choice but to nod like you understood. “What’s the very best thing you’ve seen?” she once asked when they were lying in the converted back row of seats, the wind bringing the smell of saltwater through the taped-up window, their legs still rubbing together. “People,” he said sagely. That was the end of her love.

The immigration lawyer, a lighter spinning nervously in his hand.

The criminal showed up at the same time as the prince, both toting grocery-store chrysanthemums. They waited to let the other walk through the door first, and that’s how the mosquito got in.

The last, always the latest, was the man in the white t-shirt and blue jeans, dark hair in a small curl, whose skin was a degree cooler than you expected, every time. He kissed her right cheek and left a dampness there. It would haunt her.

The men enjoyed each other; they milled like social goats around the parlor, some twisting into the kitchen to watch her garnish the curry with cilantro, to offer half-hearted help. She spilled some ice and before the lawyer could grab it, the roller skater slipped. Their laughter sounded like a stadium, and only the man in blue jeans watched her quietly. But the punch was already made; there was nothing to see here.

Her brothers sat down first, their feet tired after a day on the factory floor. The Catholic uncle was frowning at the man who lived on a bus. He was waving his fingers in a halo pattern around his head, talking about condors, about spirituality. Her father pulled up his sleeve, and the doctor inspected a mole.

She rang a glass—crystal—and the roller skater slid into his seat. The criminal breathed on a spoon and rubbed it till it shone. They all went quiet, which was what she’d always wanted. She was the only one standing.

“It’s a real gift you all could be here,” she said, and someone coughed. The prince reached for one of the twelve silver cups lining the punch bowl’s rim, and she said, “Wait.” She said, “I said it’s a real gift.”

She’d never heard such silence. So this was the simple power of being tall. From the kitchen, nose-deep in a spilled pool of punch, only the mosquito buzzed woozily.

“You’ve each taught me so much. Dad, you told me Saturn has 82 moons, the most of any planet, which made you, Ricky, pinch me 82 times. We must’ve been on the way to deer camp; remember?”

She pointed to the etymologist. “You taught me that Hindus call the planet Shani, and it’s a star of judgment, doling out rewards to the good and punishment to the wicked.”

“And you,” she said, pointing now to the criminal, “you bedded me in the back of your silver Saturn Ion in 2003, on those gray cloth seats that smelled like mustard.”

He laughed and shook his head. “Baby girl—”

“You took me to the Prado,” she said to the prince, who was turning red prematurely, “and stood me in front of Rubens’ painting of Saturn Devouring His Son and whispered how you wanted to tear my breast just so, but when I said Rubens’ wound looked vaginal while Goya’s looked phallic, and what did that mean about hunger and fatherhood, you just put your hand on my skirt again.”

“Joking,” he said, tightening his tie.

“In that tent in Thailand, you—”

“Oh my god, again?” The man who lived in a bus put his head in his hands. “I thought it was a roach.”

“Zeuxidia amethystus, the common Saturn, a paper-thin butterfly.” She put her hands on her stomach, felt herself breathe in. She needed to pace herself. But when she looked at the man in blue jeans, she couldn’t taste the words in her mouth. Her tongue was too dry to count all the wrongs, too dry for this banquet. She took the ladle from the bowl and began spooning punch, pale and mephitic, into the twelve cups, which the men took by their wooden handles and hesitantly raised, waiting for the toast.

“The things you taught me,” she said, ladle raised like a guillotine, “weren’t the things I wanted to know. As Stevie Wonder said, on Saturn—”

And the roller skater interrupted with a warble: “People live to be two hundred and five…”

They raised their cups. On Earth, men didn’t live so long.