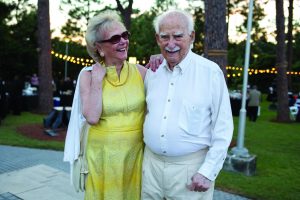 Sydney and Walda Besthoff have been important business and cultural leaders in New Orleans for many decades. Sydney Besthoff served as chairman and CEO of K & B Incorporated, a retail drugstore chain in Louisiana and the Gulf South, founded by his grandfather in 1905. After an extensive period of expansion under Mr. Besthoff’s direction, with 184 stores in six states, K & B was sold to the Rite Aid Corporation in 1997.Mr. Besthoff has served on the boards of numerous business and arts organizations. He was a founder and past president of the board of directors of the Contemporary Arts Center of New Orleans, a successful alternative art space presenting a wide variety of visual and performing arts programs. He also has served on the boards of the New Orleans Museum of Art; First National Bank of Commerce, New Orleans; National Association of Chain Drug Stores; Boy Scouts of America, New Orleans Symphony; United Fund; and Newman School, New Orleans.Walda Besthoff, a native of New Orleans, like her husband, has had a lifelong commitment to the performing arts, particularly theater and dance, as a performer, staffer and patron. Throughout the late 1960s and ’70s, she served in administrative and institutional advancement positions for various local ballet groups. Mrs. Besthoff served on the board of the Contemporary Arts Center, New Orleans, in the 1980s, chairing the Capital Campaign for the expansion of the CAC.

In 1978, Mr. and Mrs. Besthoff established the Sydney and Walda Besthoff Foundation, a private foundation dedicated to cultivating public interest in the arts, particularly contemporary sculpture. The Foundation’s collection began in 1977 and has grown to more than 100 works. The collection is on view at the Foundation’s headquarters on historic Lee Circle and is open to the public. Sydney and Walda Besthoff were selected by Art & Antiques magazine in 2002 as one of “100 of America’s Top Collectors.”