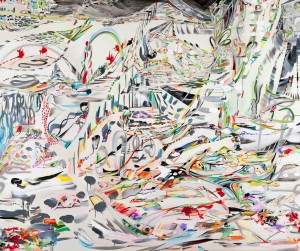 NOMA acquired its first painting by Regina Scully in 2014 and added another this past year. Since then, the museum’s ties to this young New Orleans painter have grown even closer thanks to a collaboration initiated by Lisa Rotondo-McCord, Deputy Director for Curatorial Affairs and Curator of Asian Art.

Rotondo-McCord saw many stylistic parallels between the calligraphic abstractions of Scully, which hint at landforms and horizons, and the Japanese art that she has showcased at NOMA for decades. When the curator met Scully at an exhibition opening, she invited the artist for a private viewing of NOMA’s Japanese paintings. That visit proved to be the first of many monthly meetings.

“Regina isn’t making Japanese art, but some of the techniques of building  a composition were akin. She uses shifting perspectives to suggest space, for example, a method also employed by Japanese artists,” Rotondo-McCord said. “I thought there might be a chance for  an interesting dialogue if we looked at NOMA’s collection together, with an eye to creating an exhibition.”

Now slated for April 2017, the exhibition will mix contemporary works by Scully and a selection of Japanese paintings dating from the 17th century through the 19th century. It fits with NOMA’s ongoing effort to connect contemporary artists with the museum’s collection and with the New Orleans community. Other projects under development include a commission from Scottish designer Geoffrey Mann, and exhibitions involving textile artist Diedrick Brackens and sculptor Leonardo Drew.

Scully has created new works for the collaborative show. While none of them mimic Japanese models, she said, they do expand on her own vision. In some cases she has adapted brush strokes, washes and other effects from Japanese ink painting to her own, quintessentially Western medium: acrylic on canvas.

“For me, this was an amazing opportunity,” Scully said. “Usually these Japanese paintings are behind glass in  a display case. Through this process,  I’ve gotten close enough to examine individual brushstrokes and think about the mechanics of making those marks. I’ve seen a lot of things that I like, which I’m adding to my visual library even if I’m not using them yet. I don’t want to copy.  I want to digest this tradition and filter  it through my own way of seeing — and  I love to get information straight from a curator in an informal setting.”

The rapport between artist and curator came through strongly this past fall, when AQ joined the pair for one of their monthly encounters at NOMA. They met in the raw, industrial “packing room” near the museum’s art storage areas. Scully brought her sketchbook  and camera; Rotondo-McCord brought her scholarly passion for the 300-some Japanese paintings in the museum’s holdings. Together, they unrolled a  rich array of hanging scrolls, from a monochrome landscape by Ike Taiga that showed the influence of Chinese literati traditions, to a work (see back cover) created by two, little-known 19th century artists who mixed naturalistic Western depictions of birds and animals with traditional Japanese renderings of plants.

Redolent of cross-cultural connections, both the Taiga and the bird and flower scroll offered the women an opportunity to reflect on their own cross-cultural project and the slow genesis of the forthcoming NOMA exhibition.

“The first time I saw work at NOMA, I dreamt about the pieces I saw,” Scully said. “They recurred in every part of  my dream. Little sections of patterned brushwork appeared on a table or as part of a chair. When I woke up and went to the studio, I didn’t remember the dream, but I remembered the art in my dream.  It was a sign that this exhibition would be really important for my work, that the Japanese art I was seeing had connected to my subconscious and that I needed to let it out in its own unique way. Dreams tell us stuff, and this one became a part  of me. I think it will be a part of this exhibition, too.”

Rotondo-McCord jumped in with her own observations: “As a curator, it helps me to see work through a different lens,” she said. “When I look at art with Regina, I can step away from the linear, art historical approach to these paintings and ignore the curatorial voice that says, ‘this work is important and this work  is not.’ I expect the exhibition will do  the same thing for NOMA visitors. The show won’t be comparative. It’s meant to evoke conversation — and to encourage close looking.”