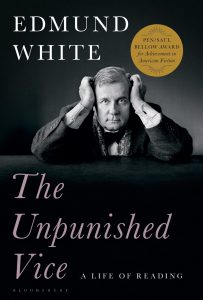 Critically acclaimed novelist, memoirist, essayist, biographer and playwright Edmund White has never shied away from confronting brutal truths. Coming of age in the 1950s, a generation prior to the Stonewall uprising, he found emotional release in writing about his experiences as a young gay male in the Midwest, never imagining that by the late 1970s he would co-author the groundbreaking book The Joy of Gay Sex. In his three autobiographical fiction works he has unapologetically shared with the world stories of incestuous feelings within his family, a promiscuous sexual awakening, his entrée into the New York art and literati scene of the 1960s and ’70s, and his observations of the nascent gay liberation movement.

White’s most recent book, The Unpunished Vice: A Life of Reading (2018), is an account of momentous occasions over the course of the author’s 78 years paired with memorable books that mark the passage of time. From reading Henry James aloud to Peggy Guggenheim in her private gondola while gliding through the canals of Venice and friendships with Vladimir Nabakov, Joyce Carol Oates, and Michael Ondaatje, to confronting mortality after heart surgery, the only time in his life when he temporarily lost a passion for reading, White intimately chronicles his life as both a writer and a reader.

White will join Tulane professor and widely published author Thomas Beller for an “Arts and Letters” conversation during Friday Nights at NOMA on February 1 at 7 pm. He spoke with David Johnson, editor of NOMA Magazine, in advance of his talk.

Your autobiographical books are filled with shocking revelations about your family, including incest and numerous sexual encounters in your youth. Was writing about normally shameful or secretive episodes cathartic or painful?

There’s a Nobel Prize-winning poet, from Poland, who said that when a writer’s born into a family, that family is destroyed. [Laughter] And I think that’s kind of true. William Faulkner said you should always have the courage to infuriate all your relatives, but I don’t know, my mother and sister, who are the only people I was concerned with, were very good sports and they have also written books, so anything goes in our family.

I’m bolder in my writing than I am in conversation. When people quote back to me something that I’ve written I end up blushing — oh God, no! I never re-read my own writing. I barely remember what I’ve done.

As a teenager, when living an openly gay adult was not permissible, were there any characters in literature with whom you found a connection?

Well, in high school I was reading Andre Gied’s journals, which are very confessional, and quite unapologetic. I think they show that France was a lot more evolved than America at that time in the 1950s. So that was kind of an inspiration. I remember when I was about 14 reading Thomas Mann’s Death in Venice, but I think that’s about it. There weren’t really very many gay books and I didn’t know about them studying in the middle of Michigan at a boarding school.

I was 29 when Stonewall happened in 1969. I’d already been writing for a good ten years, not getting published, but writing at least. I think it was really that I felt I was going crazy, and that if I didn’t write about this stuff I wouldn’t be able to keep my head above the water. I mean it wasn’t like I wanted to be a pioneer or a leader or groundbreaking or anything. I just wanted to achieve some inner peace or stability. At first I tried Buddhism, but that didn’t work. And then I went into this confessional writing. By they time I was 15, I had written a novel that was all about coming out but I didn’t have the courage to send it off to a publisher. I didn’t even know how to do that. It exists in manuscript, this book.

You have written three biographies. What drew you to the subjects?

All three are French and they’re all three gay men: Jean Genet, Marcel Proust, and Arthur Rimbaud. I lived in France for sixteen years and the first biography I wrote was of Jean Genet. He was a very famous writer when I was young and his plays were the longest-running plays on Broadway at the time. So when my editor said to me, Do you know of anybody who would write a biography of Jean Genet — he had just died the year before — I said, You mean to say there isn’t one? And he said no, and so I said, Well, I’ll do it. But I had no idea it would take seven years of research. I thought I could probably do it in three years. But then it became so oppressive I just hated it because I thought I’d never be able to finish it. And I remember being in New York for a holiday and I saw a bus coming down the street and I remember thinking, If I just step in front of it, I won’t have to write the Genet biography!

That was the only long biography I ever wrote. But then I wrote James Atlas, the publisher, and he had a short series of mini-biographies and I chose Proust and Rimbaud. Rimbaud stopped writing about the time he was 19, so I thought, Well the interesting part of his life is so short that it’ll fit well in a short book. And with Proust there have been so many books about him, thousands. I used to teach at Princeton and I think three whole shelves of the library were full of books about Proust. He must be the most commented upon modern writer, unless it’s James Joyce. But I thought well, nobody really talks about his being gay or they kind of skip that subject or pretend it didn’t really exist. And I was quite criticized for talking about him being gay, even as late as the 90s because people don’t want to think a great author was gay.

You are among the rare breed of authors who has found success in both fiction and nonfiction. Is there a benefit to doing one as opposed to the other?

With nonfiction there’s usually a very clear task. You’re asked to review a book, or you’re asked to write an essay about Stonewall, or you’re asked to write a biography of a person. And there’s a great deal of reading and research that’s required, but at least the parameters of your task are clear. But with fiction there’s no assignment, there’s no task, it’s all invented. And I’ve written a lot of autobiographical fiction where at least you can copy your life. But now I’ve also written several books that are novels that are entirely invented, and I’m writing one now. And then you have to do what Gustave Flaubert called “the marinade.” You have to lie on your couch and daydream for hours trying to think up the plot.

For a bibliography, and to read more about Edmund White, visit his official website.

Arts and Letters is made possible through funding by The Patrick F. Taylor Foundation. Additional support is provided by the Tennessee Williams/New Orleans Literary Festival.