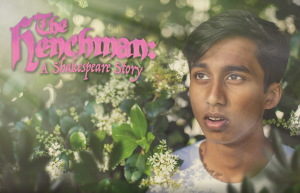 Rohan Padmakumar portrays Jacob, the Changeling Boy, in The NOLA Project’s world premiere of The Henchman.

For fifteen nights, on select dates from May 8 through 31, The NOLA Project will stage The Henchman in the Besthoff Sculpture Garden. The production marks the eighth collaboration between NOMA and this innovative theater company. The play, a world premiere by Michael Aaron Santos, serves as a biographical sequel to one of the lesser-known characters in William Shakespeare’s A Midsummer Night’s Dream, the “changeling boy.” Named Jacob, the son whom Oberon and Titania quarreled over many years ago, unexpectedly discovers that he is the long-lost son of the King of India. Jacob quickly realizes he must flee his fairy-world homestead to escape the pursuit of Esau, his warmongering brother, who is hell-bent on dispatching Jacob, and claiming the throne. Oberon and Titania are forced to send Jacob with his faithful friend Puck to Greece to enlist the aid of Theseus and Hippolyta in an adventurous comedic sequel to the Bard’s timeless tale.

A.J. Allegra, founding artistic director of The NOLA Project spoke with NOMA Magazine about the play. The Henchman was specifically written for the Besthoff Sculpture Garden.

How did the idea of this original play come about, especially considering that it was written specifically for this site?

A couple of years back, I spoke to Michael Aaron Santos, who’s one of our company members as well as the head of the theater department over at Delgado Community College, and I said, “I’d like to commission you to write a play for the sculpture garden.” He said, “Okay, well do you have anything in mind?” Because, we traditionally do literary adaptations of old books — The Three Musketeers, Don Quixote, Alice in Wonderland — he said, “Is there a certain story that you want to assign me?” I said, “I’d like you to go away for a couple of weeks and germinate on what you think might be good for you.” It was totally open, but he knew that it would be something that would be written in and for the sculpture garden and we try to keep our outdoor shows light and family-friendly, spontaneous and fun.

Then, I remembered this, Oberon and Titania in Midsummer, in the very first scene that we see them in, they’re having a massive lovers’ spat, and it’s about this changeling child who’s never actually a character that is seen in Midsummer Night’s Dream. It’s a character spoken of, not seen. Oberon wants to train the changeling child to be his henchman, whatever that may mean to anyone. We think of henchmen as being a goon or a militant type of bad guy. Michael said, “I’d like it to be set where the changeling boy is in his teenage years.” He’s coming into his own and learning about what he wants to do, and he’s realizing he doesn’t want to be a henchman. He doesn’t want to follow Oberon’s prescribed path of militancy. He wants to actually be … He’s into medicine and science. He wants to basically be a doctor, a medicine man, and cure things.

Who portrays the changeling boy?

The changeling boy is named Jacob. He’s 17 years old, and he’s played by an actual 17-year-old student actor at Lusher High School, Rohan Padmakumar. He has three times in a row gone to the National Shakespeare Competition as the state representative from Louisiana. Needless to say, he’s very good. In this story, we follow Jacob as he’s pushing back against the idea of being Oberon’s henchman. But, at the same time, he’s discovered by his brother, Esau, who’s played by James Bartellet. Esau is his brother that is back in India that discovers where his long-lost brother has been all these years. Esau is basically a war-mongering, classic villain that wants to find and then take his brother back from the fairies and then probably kill him.

Puck and Jacob then basically have to escape. They escape the fairy kingdom and flee to Ireland. The play traverses the planet in fun ways, in ways I think that Shakespeare would have liked. We don’t need to think of these places as modern-day, the country of India, modern-day, the country of Ireland. You remember that Shakespeare wrote about all these, a multitude of environments that he had never been to. That’s why his plays are littered with mistakes. That’s one of the ways know that we know about Shakespeare’s level of education, how he was such a self-taught person, because he wrote all these plays that took place in Italy and Vienna, and he’d never been to these places. Likewise, Michael has written about these places as if it was written in the 17th century, back when Shakespeare was producing his plays. and he has written the whole play in iambic pentameter, which is quite a feat. The Henchman is written in Shakespearean English but Michael has filled it with a lot of modern-day sensibilities and allusions and humor.

Audiences will derive pleasure in that it feels and sounds like a play that Shakespeare wrote, but, at the same time, it feels very much of our time, of the twenty-first century.

What role does the Besthoff Sculpture Garden play in The Henchman?

It’s to our advantage that we’ve done so many shows here now, and Michael has been in a few of them. He knew exactly the layout of the space and his ideas for where he thought he wanted to place it. The big thing is that the play is divided into two acts, in two very separate world locations. His idea was always that we would set Act 1 in one area, and then we would do the thing that we did back when we produced Midsummer after intermission. We’d move the audience, give them a new environment to watch Act 2. It really feels like the characters have left the home and have gone traveling somewhere else. During the intermission, we’re going to be trying to use boats and stuff throughout the lagoon to literally move the characters from one location to another.

What do you think Shakespeare would think of this new play if he here among us as a critic?

I think that Shakespeare would be admiring of it, because Shakespeare himself was a populist. He was not at all a pretentious writer. He was very much a populist. He brought characters back that became beloved. He even brought them back from the dead. Falstaff is a great example of a totally beloved Shakespeare character that is invented in Henry IV, Part 1, and then he returns in Henry IV, Part 2 in which he’s killed. But, audiences hated the fact that Falstaff was dead, so much so that they begged Shakespeare to bring him back. Shakespeare then writes The Merry Wives of Windsor in which Falstaff is just not dead. Basically, if you’re the playwright, you can do whatever the hell you want.

The Henchman runs Wednesdays, Thursdays, Fridays, and Sundays at 7 pm from May 8 to 26. All seating is bring-your-own. Food trucks will be available at all performances as well as a fully stocked bar. No outside food or drink is allowed inside the Sculpture Garden other than food truck and NOMA bar items. This production will be staged in two locations; Act I will occur in the oak grove in the back of the current garden and Act II will move to the front pine grove during the intermission.

Rain Plan: For productions canceled due to inclement weather, we will notify all ticketed patrons no later than 4pm. Patrons will then receive instructions via email on how they may reschedule their tickets for another performance or request a refund. All ticket purchases for any production that is rained-out mid performance are final.

Presentation of The Henchman is supported by a grant from the New Orleans Theatre Association (NOTA).