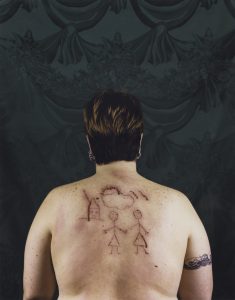 Roger’s personal collection of more than eighty paintings, photographs, and sculptures reflects the gallery’s storied forty-year history as well as Roger’s skill and sophistication as an art collector. Bringing together artworks Roger has collected from the 1970s through today, Pride of Place unfolds as an evolving narrative about place, identity, and belonging in New Orleans’ contemporary art scene over the course of the last four decades. Roger’s personal art collection reflects the city’s dynamic local culture while at the same time responding to more national and international concerns. Incorporating many of the artists that the gallery exhibited over the years, Roger’s collection includes experimental works by regional artists as well as vanguard works made all across the country. The artists included in his collection—many of whose work he purchased long before they became established voices in contemporary art—demonstrate Roger’s trailblazing early engagement with gender, sexuality, and race. Alongside other influential early New Orleans galleries, such as the Orleans Gallery and Galerie Simonne Stern, Roger was instrumental in putting the art of New Orleans into conversation with the broader art world, and into dialogue with the pressing social and political issues of the time, from the AIDS crisis to Hurricane Katrina and the lingering effects of environmental and manmade disasters affecting Louisiana. Roger opened his gallery at a moment when the field of contemporary art was rapidly expanding, incorporating more diverse perspectives. His gallery helped reframe the conversation about regional art, showing how the art of the broader United States—and especially the diverse and eclectic artistic culture of New Orleans—could offer a more expansive and inclusive view of American art and identity.

As one of the first galleries in the South to embrace the work of female artists, some of the first shows at Arthur Roger Gallery were devoted to the early work of such artists as Ida Kohlmeyer and Lin Emery. Other early projects included showing pointedly political papier-mâché sculptures by Willie Birch and exhibiting the work of openly HIV-positive artist Robert Gordy, whose work directly tackled the AIDS crisis. In 1993, the gallery mounted Regarding Masculinity, a group show that included Sue Williams, Kiki Smith, and Marlene McCarthy, and what later became Catherine Opie’s iconic self-portrait series was presented for the first time (see above). Pride of Place puts early works by such artists as Kohlmeyer and Gordy into conversation with some of the most dynamic art being made in the city today by Luiz Cruz Azaceta, Dawn DeDeaux, Lee Deigaard, and Bob Snead, among others. This gift significantly expands NOMA’s current holdings of modern and contemporary art, bringing works of national importance into the collection while also reaffirming the museum’s commitment to the work of local New Orleans artists. Taken together, Roger’s remarkable collection offers an unparalleled glimpse into the history of New Orleans’ evolving art scene, representing a contemporary art collection still in formation as New Orleans continues to gain prestige as an art capital.