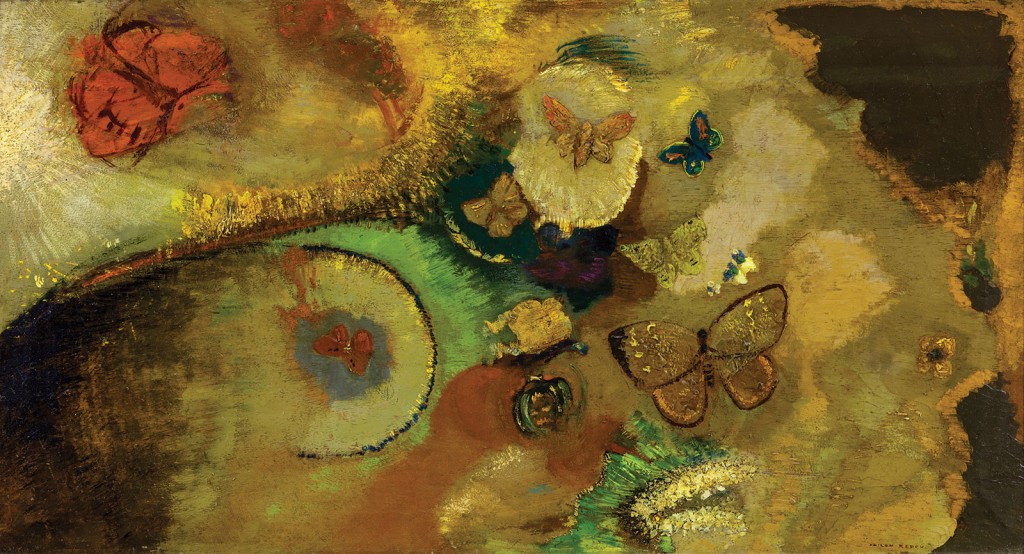 Symbolist painter Odilon Redon was born in France but conceived in New Orleans, creating an enigmatic connection to the American South. Redon often spoke and wrote of his in utero journey from New Orleans to Bordeaux, and envisioned his Creole heritage as a critical precursor to the more exotic and experimental elements of his art. Although Redon spent most  of his childhood on the family’s estate in Bordeaux, the South—and particularly New Orleans—always possessed a strong imaginative pull.

Redon’s Le Reve des Papillon is currently on view at NOMA in the Roussel Norman Gallery on the second floor.

Redon’s father made his fortune  in the slave trade in New Orleans in  the 1830s, where he met and married Redon’s mother, Marie Guérin, a French Creole woman from Louisiana. One of Redon’s most important early supporters, the French art collector and critic Marius-Ary Leblond, felt that it was their shared “Creole upbringing” that helped him understand the fantastical and often bizarre nature of Redon’s work. To many critics of the period, Redon’s art seemed to possess what Jules Boissé called in 1880 “a kind of mysterious ‘Americanism’…[that] has lead to a pathological creation like that of Edgar Poe through a wild and solitary inspiration.”

Redon, like many of the other French artists and writers connected with the Symbolist movement, was intrigued and inspired by the macabre imagery in Edgar Allan Poe’s short stories, as well as his connection to  the American South. Translated into French by poet Stéphane Mallarmé, Poe’s stories helped pave the way for the wild, expressive art of the Symbolists, which reveled in dreams and fantasies, and acknowledged the darker, more disturbing aspects of a contemporary culture haunted by the specters of slavery and colonialism.

In the 1880s, Redon created a series of lithographs titled To Edgar Allan  Poe that drew from Poe’s visionary but often disturbed imagery. To Redon, Poe’s stories represented the height of human imagination and also captured the sense of alienation and dislocation at the heart of much Symbolist art. In paintings like Le Reve des Papillon, Redon portrayed nature with a fantastic intensity, showing butterflies floating within an ephemeral and unfixed realm of fantasy and delusion that calls forth both dreams and nightmares.