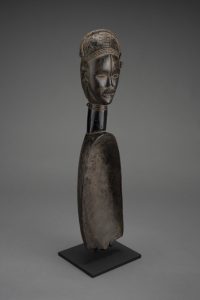 Dan ceremonial ladles known as wunkirmian or wakemia (spoon associated with feasts) are badges of prestige that acknowledge a woman for her invaluable generosity to her family and the entire community. These objects were created to serve as symbols of status and the bearer of spiritual powers. The complex design and craftsmanship of these ladles are the mark of their relevance.

To create such objects, Dan sculptors rely on anthropomorphic forms and draw upon the style developed in other carvings such as masks and figures. This example presents a Janus head of a female while the spoon shape of the ladle is symbolic. If they were used, the neck would have served as the handle. These visual cues suggest that the natural characteristics of a nurturer that are ascribed to women are assumed to be all encompassing. The elegance associated with the faces is suggestive of the unique place women hold in the community. And the solidity of the object marks the feminine power of fertility. 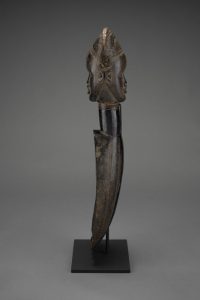 As an emblem of honor and status, wunkirmian are the possession of the wunkirle or wakede (acting woman at feasts). A title of great distinction, it is given to the most hospitable woman of the community. Hans Himmelheber, and Wowoa Tame-Tabmen described the role of the wunkirle in an article dedicated to the topic. One woman in each community is honored with the title of wunkirle at a time. When a wunkirle becomes old she chooses her successor from among the young women of her community and passes down her wunkirmian. With the honor comes a lot of responsibility, because the wunkirle must be of a generous disposition, gladly offering her hospitality to anyone at any time, organizing and providing for important meals, and feeding travelers. In order to be able to afford this largess, the wunkirle must be successful and industrious, and a well accomplished farmer.

In addition to being a prestige object, wunkirmian also hold spiritual power. They are a Dan woman’s chief liaison with the power of the spirit world and a symbol of that connection. In the words of a wunkirle, Doa, the ladles contain “all the power and fame of the wunkirle.” In Dan culture, the wunkirmian have been assigned a role among women that is comparable to that which masks serve among the men folk. Like masks, each wunkirmian is given an individual name. When a new wunkirmian is carved to replace an old one, sacrifices are made to empower it. In many instances, wunkirmian are featured in the same ceremonies with masks, tossing rice in front of them as a blessing while they proceed through the village.

In that context, one of the wunkirle’s responsibilities is preparing the large feast that accompanies masquerade ceremonies. Excellent farming abilities, organizational talents, and culinary skills of the wunkirle are called upon during the planning of the welcoming celebration of the masquerade spirits. When a woman has been selected as the main hostess of such a feast, she navigates the community carrying the large ladle as the symbol of her status. A line of other women follows her from her community, each carrying a pot of cooked rice or soup. With help from her numerous assistants, usually female relatives and friends, she distributes grains and coins to the children of the community while dancing and singing. This event creates a visual analogy that honors the hostess, and women in general, as a source of food and life.