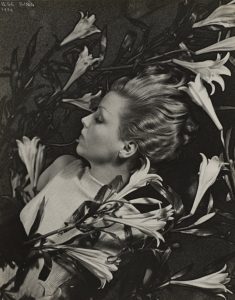 In 1930, Ilse Bing moved to Paris, where she was influential in fields as diverse as photojournalism, fashion photography, and advertisements. She also tinkered with avant-garde darkroom practices, inventing her own version of the solarization technique, a process that partially reversed the tones in a positive print so that certain parts appear as a negative. This print combines that practice with an arresting advertising image that she created for Elsa Schiaparelli’s perfume, Salut. The perfume’s lily scent is visually embodied by actual lilies in Bing’s photograph. Although the lily is typically associated with purity, in this photograph, which functions as a representation of the sense of smell, the lily’s symbolism is ambiguous—perhaps pure, but also seductive, or even ominous. The model lies serenely among the flowers. Her eyes are closed, a decision that privileges scent over sight, but it also renders the scene funereal. As such, it is the perfect embodiment of the perfume’s name: salut is most commonly thought of as a greeting, but the word is equally employed as a farewell. As both a negative and a positive, the figure seems trapped between a state of emergence and disappearance.