Since its opening in 2003, the Besthoff Sculpture Garden has been a place of reflection for visitors—and in the case of three works with mirrored surfaces that quality is quite literal. 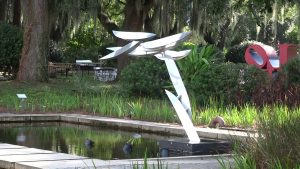 Wave, a kinetic sculpture by Lin Emery, sits above a reflective pool that cascades into the lagoon system of City Park. The sleek, multi-faceted sculpture that imitates the rippling effect of water is composed of seven interconnected arms, which seem to simultaneously move independently and collectively. Not only striking, the work is a study of mathematics and engineering.

Emery, born in 1926, is a pioneering figure in New Orleans’s contemporary art scene.  has long been fascinated by chaos theory, particularly as it relates to nature and weather. Emery’s kinetic sculptures are not only inspired by natural forms, but also activated by natural forces such as magnets, water, and wind. The unpredictable character of these forces, especially the latter, yields countless visual permutations from a single sculpture.

In his essay Lin Emery: Borrowing the Forces of Nature, published by NOMA in 1996 in conjunction with an exhibition of Emery’s work, Edward Lucie-Smith notes an intriguing paradox found in Emery’s sculptures: “These are works made of industrial materials, and increasingly dependent on a kind of industrial virtuosity for their effect. There is nothing clumsy here: everything is economically engineered to produce the effects which the artist has in mind. Yet the sculptures themselves do not produce an industrial impression … they are ‘about the energies moving through nature.’ … [The] sculptures themselves take on the qualities of living, growing, natural things.” 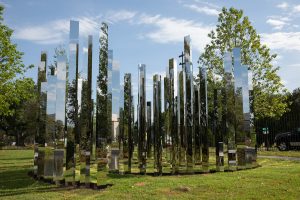 Jeppe Hein is a Dutch artist whose sculptural installations challenge the tradition of the passive viewer in art. Using unconventional materials and technologies like mirrored surfaces and motion sensors, Hein’s work always requires the viewer to activate the work. In Mirror Labyrinth, Besthoff Sculpture Garden, he creates a disorienting circular maze through the placement of reflective panels in an inward spiral. From the inside, we are engulfed in a multitude of refracted images of ourselves and our surroundings that place us within an endlessly repeating set of images. The industrial material of the sculpture contrasts with the often unpredictable movements of the people and surrounding landscape to remind us of the oppositions between artificial and natural, static and active, and human and non-human. Mirror Labyrinth has quickly become a favorite spot for photo opportunities that play off whimsical optical illusions. 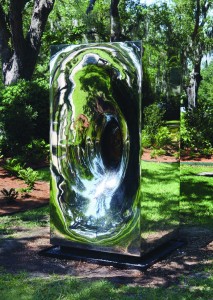 Anish Kapoor is a leading contemporary British-Indian artist working in large-scale public sculpture. Biomorphic and geometric forms define his work, with a particular emphasis on negative space. Among is best-known works is Cloud Gate (2006) in Chicago’s Millenium Park, commonly called “The Bean,” which has become a globally recognized landmark in the city. Kapoor’s untitled work in the Besthoff Sculpture Garden is sited beneath overarching live oaks amid cultivated lush undergrowth, practically camouflaging the reflective, rectangular box within its verdant surroundings. One side is circularly concave, drawing the lawn, Spanish-moss draped tree branches, the sky, and the viewer into a dark cavity. In describing his work, Kapoor has said, ““That’s what I am interested in: the void, the moment when it isn’t a hole. It is a space full of what isn’t there.”