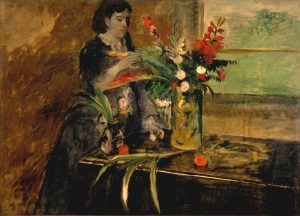 Edgar Degas arrived in New Orleans in 1872 for an extended stay, two years after he had enlisted in the National Guard during the Franco-Prussian War, and two years before he would join a group of painters back in Paris for the first of what would become known as the Impressionist Exhibitions. It was a pivotal time in his career, one that brought to the fore many important familial, artistic, and personal connections.

Degas (1834–1917) was the oldest of five children born to Célestine Musson De Gas, who was originally from New Orleans, but moved to Paris. In 1872, Degas had many family members living in New Orleans, including his brother René, whose wife Estelle is represented in this painting, and Michel Musson, his uncle, who lived on Esplanade Avenue where Degas stayed during his visit and painted this portrait. Michel was also Estelle’s father, making Degas’ familial connection therefore very tangled: Estelle was both his cousin and his sister-in-law.

Artistically, Degas was at a crossroads. Earlier in his career he had hoped to become a classical history painter, an ambition evident in his drawings which often emulate or copy Renaissance sheets. By 1872, however, Degas had ceased submitting history paintings to the important annual salon exhibition in Paris, instead favoring pictures of modern life. Stylistically too, his work had begun to change. While it is believed that this portrait of Estelle remains unfinished, its sketchy nature, with long, unfettered brush-strokes and single dashes of paint standing in for more concrete forms is in keeping with the direction he was headed, away from a more defined, classical approach and towards a more abstract mode of representation.

Finally, and perhaps most importantly, was Degas’ great sympathy for Estelle. He had first met her ten years earlier in Paris, when she had temporarily fled New Orleans with her mother and sisters during the Civil War. At that time, she was pregnant and recently widowed—her first husband, Joseph Davis Balfour, the nephew of Confederate President Jefferson Davis, was killed in action at the Battle of Corinth. In 1872, she was married to Degas’ brother, was pregnant again, and was practically blind from a chronic eye disease. When Degas had enlisted in the National Guard two years prior, it was revealed his eyesight was limited during rifle training. This discovery would worry him for the rest of his life (at the end of which he would be practically blind) but it also deepened his natural connection to Estelle. In this portrait, he represents her arranging flowers by touch and smell, instead of sight. Degas frames Estelle’s pregnant belly with the floral arrangements, punctuated by a pink camellia superimposed directly over her naval.

Estelle’s already challenged life was not destined to get better. Her daughter with Balfour would die at the age of 19, and she would ultimately be abandoned by René, leaving her father Michel to worry about his financial ability to care for her and the children, especially as he had invested in confederate war bonds. In 1872, however, she and Degas shared the moment of this portrait session, and all the promise and worry that it embodied.