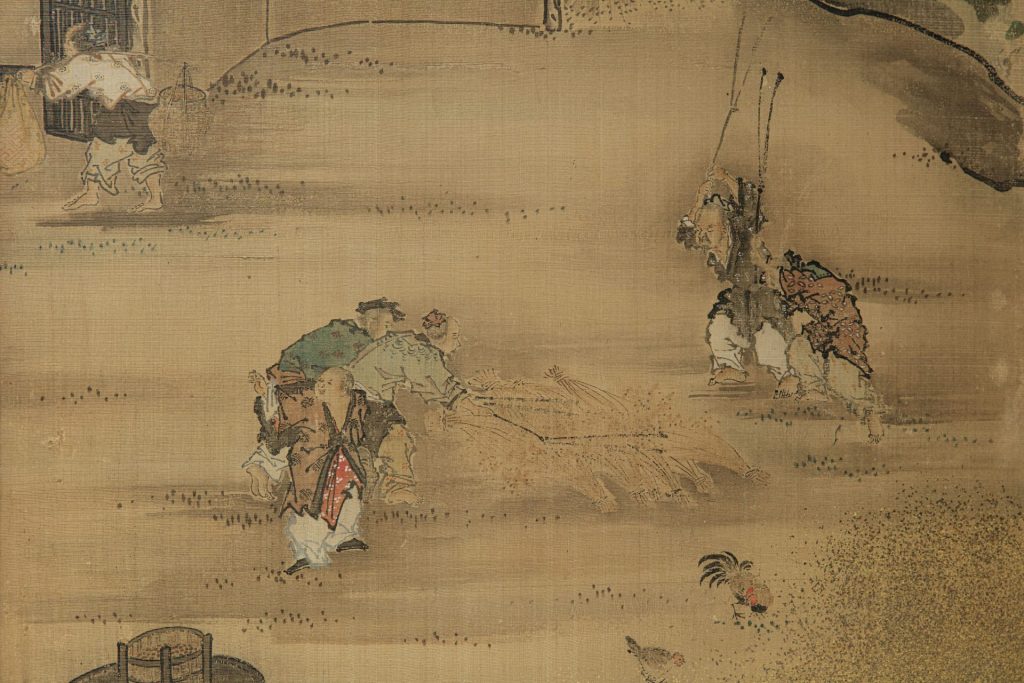 A pair of six-fold screens by Kano Tsunenobu (1636-1713) in NOMA’s collection that depicts the labor involved in rice cultivation throughout the year has provided both the title and focus of the current exhibition in the Japanese galleries: Rural Occupations: Images of Work in Edo-Period Art. Images of urban and rural workers were popular painting themes during the Edo period (1615-1868), created largely for patrons within the governing classes: the military rulers, or shoguns; the daimyo (provincial leaders akin to governors); and the samurai.

The Tokugawa shogunate established a Confucian-based societal hierarchy that governed nearly all aspects of life. This rigid system was based on perceived “moral” contributions to society.  Unsurprisingly,  the warrior class (shoguns, daimyo, samurai) was at the top, as they provided leadership and national security, next were the farmers who produced the food that nourished the population, followed by the artisans who produced useful goods, and lastly, merchants, who ensured the transfer of those goods and other resources.

Members of the Kano school, the official artists to the Tokugawa shoguns during the Edo period, produced images for their elite patrons, combining a Chinese academic- influenced style with decorative elements suitable for the scrolls and screens placed within official residences and castles, as well as temple meeting halls. These engaging, and idealized scenes of what was surely back-breaking work promoted the idea that a peaceful and prosperous state could be achieved with benevolent leadership, and a cooperative, respectful, working class.

A stable supply of rice was crucial to the shogunate and to the country as a whole. Far more than a dietary staple, rice was the foundation of the Japanese economy. Wealth was measured by it, samurai stipends were calculated by it, and peasants and agricultural laborers were required to pay their taxes in it. Thus, a failed, or even reduced, harvest could lead to national catastrophe.

Tsunenobu, a second generation leader of the Edo (now Tokyo) branch of Kano School, places these scenes of peasants at work within a seasonal landscape. The late spring and early summer tasks of plowing and rice transplantation are visible on the right screen, and the fall harvesting and processing – including the lively threshing of the rice seen in the image here- are on the left. While closely adhering to pre-established models, Tsunenobu nonetheless creates individualized and closely observed depictions of individuals engaged in agricultural work.

These screens are presented, along with nearly 40 other paintings and photographs, in Rural Occupations: Images of Work in Edo-Period Painting, on view in the Japanese galleries. These images, while created as symbols of a stable and prosperous society, now serve to provide present-day viewers a glimpse – albeit idealized- into the lives of urban and rural workers during the seventeenth through nineteenth centuries. The exhibition, drawn from NOMA’s permanent collection, remains on view until November 28, 2021.