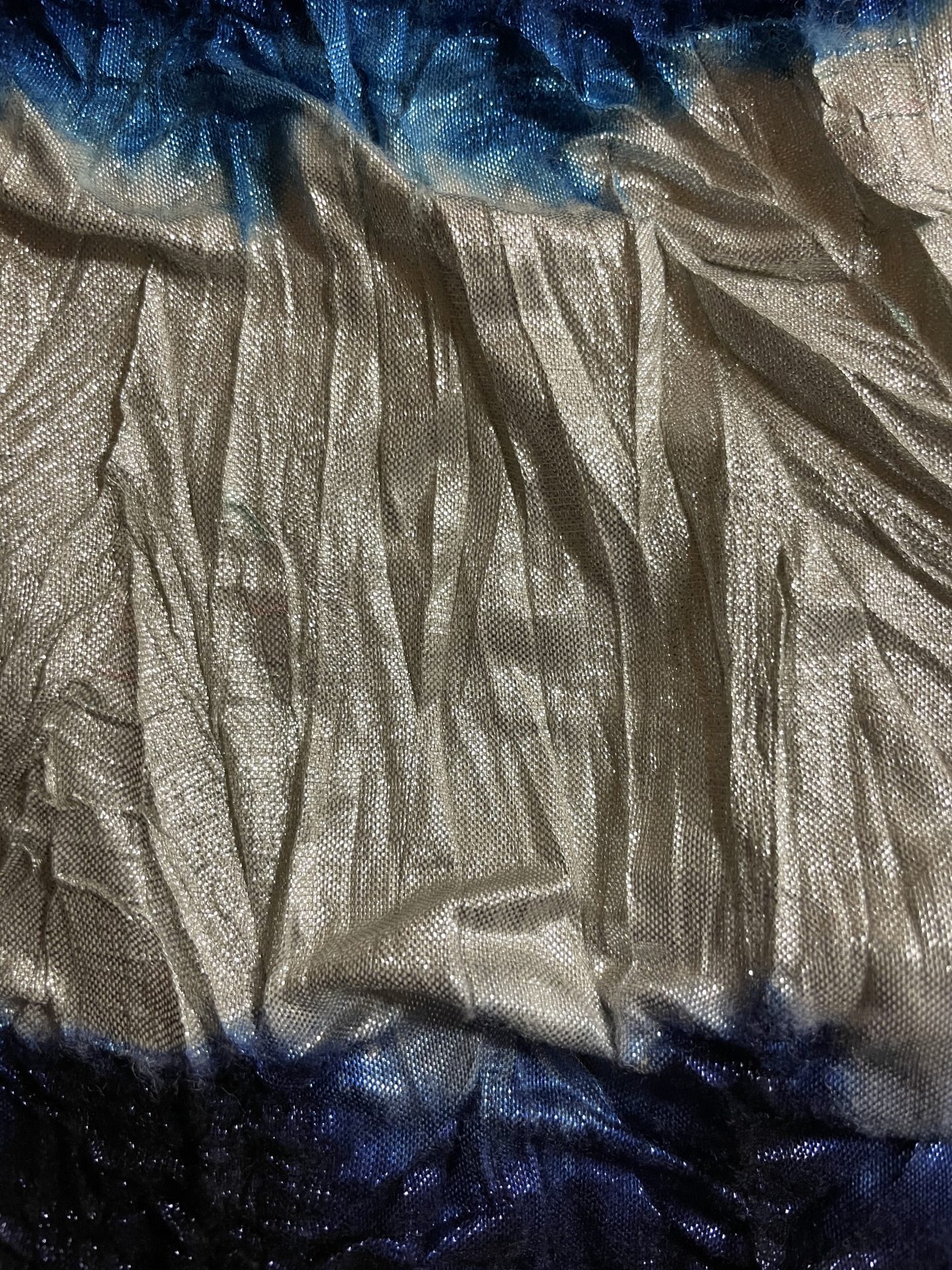 Innovative fabrics that can be blunt like concrete or ethereal like clouds sprung from the imagination of Japanese designer Junichi Arai, but were made possible through studied innovation and technological experimentation. A shimmering blue and silver textile by the artist is currently on view at NOMA in the exhibition Atomic Number 13: Aluminum in 20th-Century Design, representing the metal’s role in artistic experimentation by the end of the century.

This important innovator in 20th-century textiles grew up knowing the long history of fabric design. Junichi Arai was born in 1932 in Kiryu (Gunma Prefecture), Japan, a city with a thousand-year tradition in traditional woven textiles. His family’s sixth-generation textile mill was noted for loom-made kimonos and obis (sashes) and specialized in fabrics that included metallic elements. 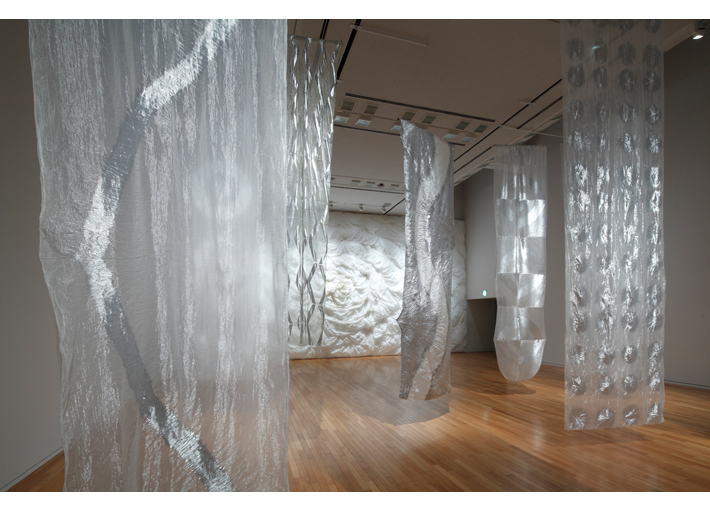 Rooted in Kiryu City’s craft tradition but looking to the future, Junichi Arai pushed his family business forward through deep experimentation with new materials and production tools, developing unimaginable new textures that ranged from dewy spiderwebs to soft metallics. Through his career, Arai attained 36 patents or intellectual rights to fabric manufacturing advancements. One innovation relied on traditional tie-dye techniques to chemically dissolve parts of a fabric to get a product that was both transparent and reflective. Another innovation was a bulky felt material produced by washing 100% wool fabric for long periods.

In the 1950s, Junichi Arai began weaving with metallic fibers, which were traditionally made by wrapping a metal wire around thread of cotton, wool, or silk, to give the fabric the desired shine. After eight years of study at Gunma University’s research facility, Arai developed an original method to melt aluminum onto processed polyester films to update the technique. Textile: Blue on view at NOMA is an example of this process for vacuum-plating (adhering) aluminum and other metals to the surface of polyester (plastic) film. This metal-plated film was cut into very thin strips, as thin as threads, which were woven together with traditional wool fibers. 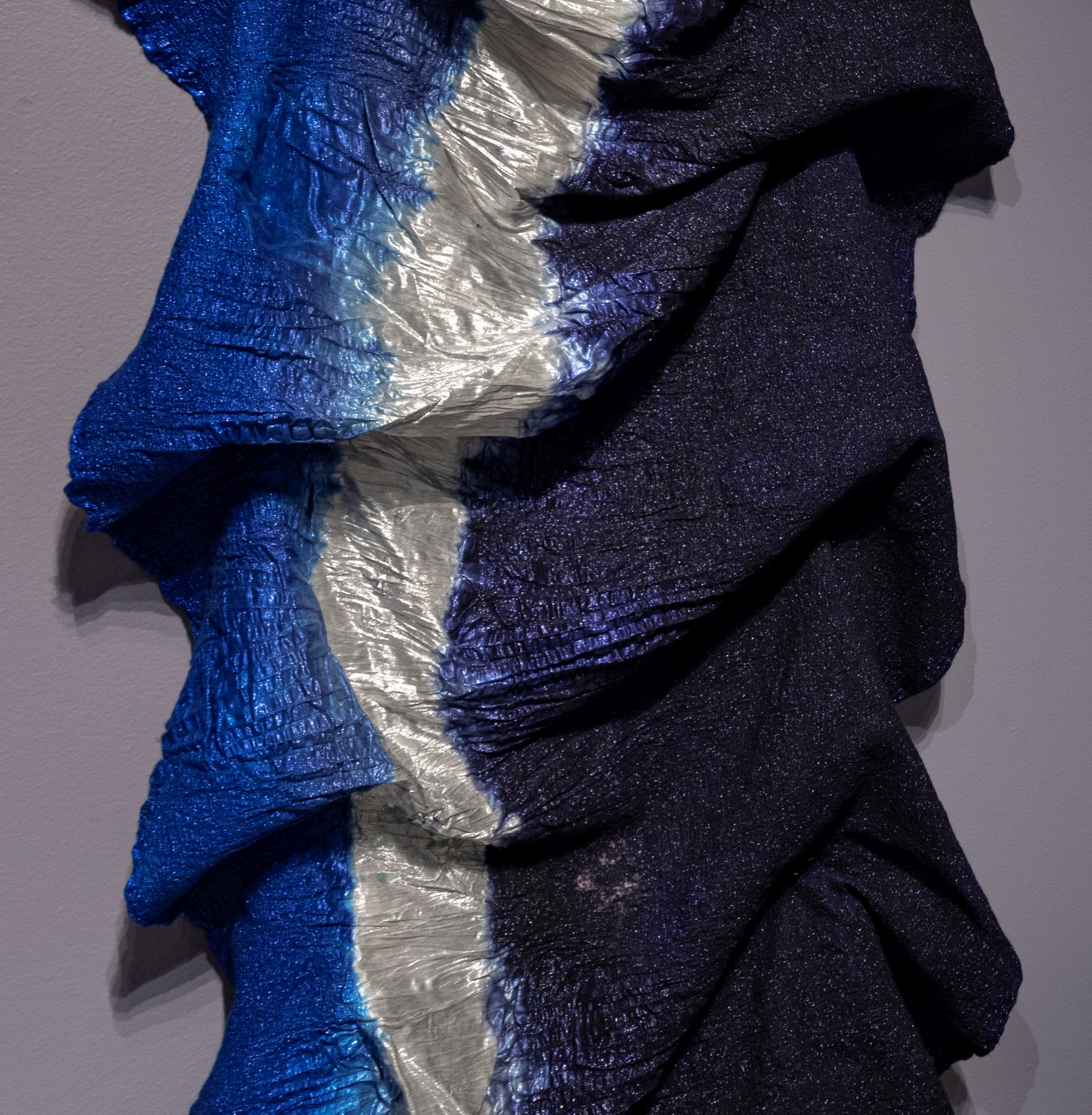 Traveling widely to look closely at world textiles, Junichi Arai admired how fabric reveals the depth of culture’s history, but also noted the potential for the material to better reflect 20th-century changes. He noted: “Among all cultural heritages, there is nothing more abundant than fabric. Nothing can exceed its warmth…Are the present textile artists creating fabric which embraces contemporary ideology?”

Led by this question, the artist exploded textile’s expressive and innovative potential in the 1970s, ushering in further advancements like computerized jacquard looms. In a 1990 New York Times article, Arai notes that the computer not only allowed for more complexity and sophistication, but it ”makes weaving one hundred times, a thousand times, faster.” 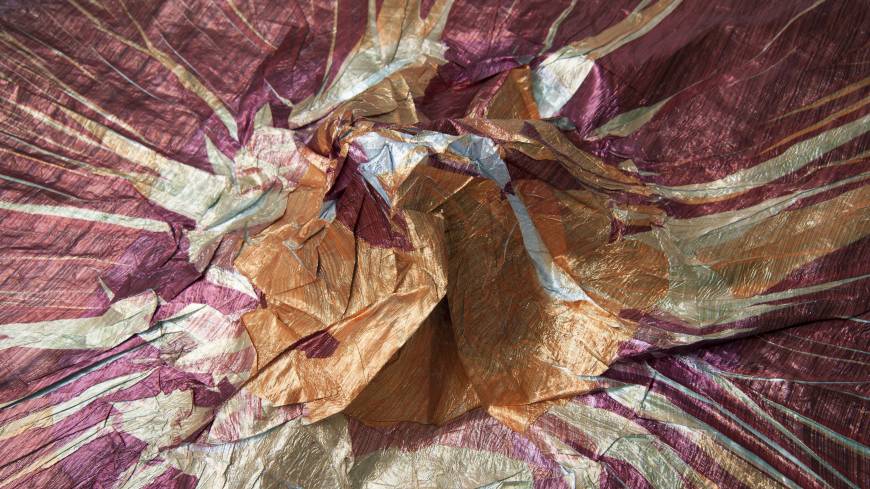 Junichi Arai’s  fabrics were a key part of the emergence of Japan as a global fashion leader in the late 20th century. High-profile collaborations with fashion designer Rei Kawakubo (Comme des Garçons) and technology-driven designer Issey Miyake fused traditional couture tailoring and contemporary Japanese minimalist design with the technological innovations in Arai’s fabric. After a 1981 Paris show where Japanese designers Yohji Yamamoto and Kawakubo ushered in an era of simplicity and deconstruction to avante-garde fashion, Arai’s textiles were employed internationally by designers including Thierry Mugler, Gianni Versace, and Jean-Paul Gaultier.

Junichi Arai’s experimental array of textile arts are celebrated by fashion world insiders and through art museum exhibitions. The artist’s longtime colleague Reiko Sudo wrote in the 1992 catalog Hand and Technology: Textiles by Junichi Arai: “He is truly the enfant terrible of Japanese textiles, delighting in snubbing convention, a naughty boy playing with ultra-high-tech toys.” Junichi Arai was given Tokyo’s Mainichi Fashion award in 1983 and became an Honorary Royal Designer for Industry in London, 1987. The artist has extraordinary examples of innovative fabrics in collections including the Museum of Modern Art and the Victoria and Albert Museum. 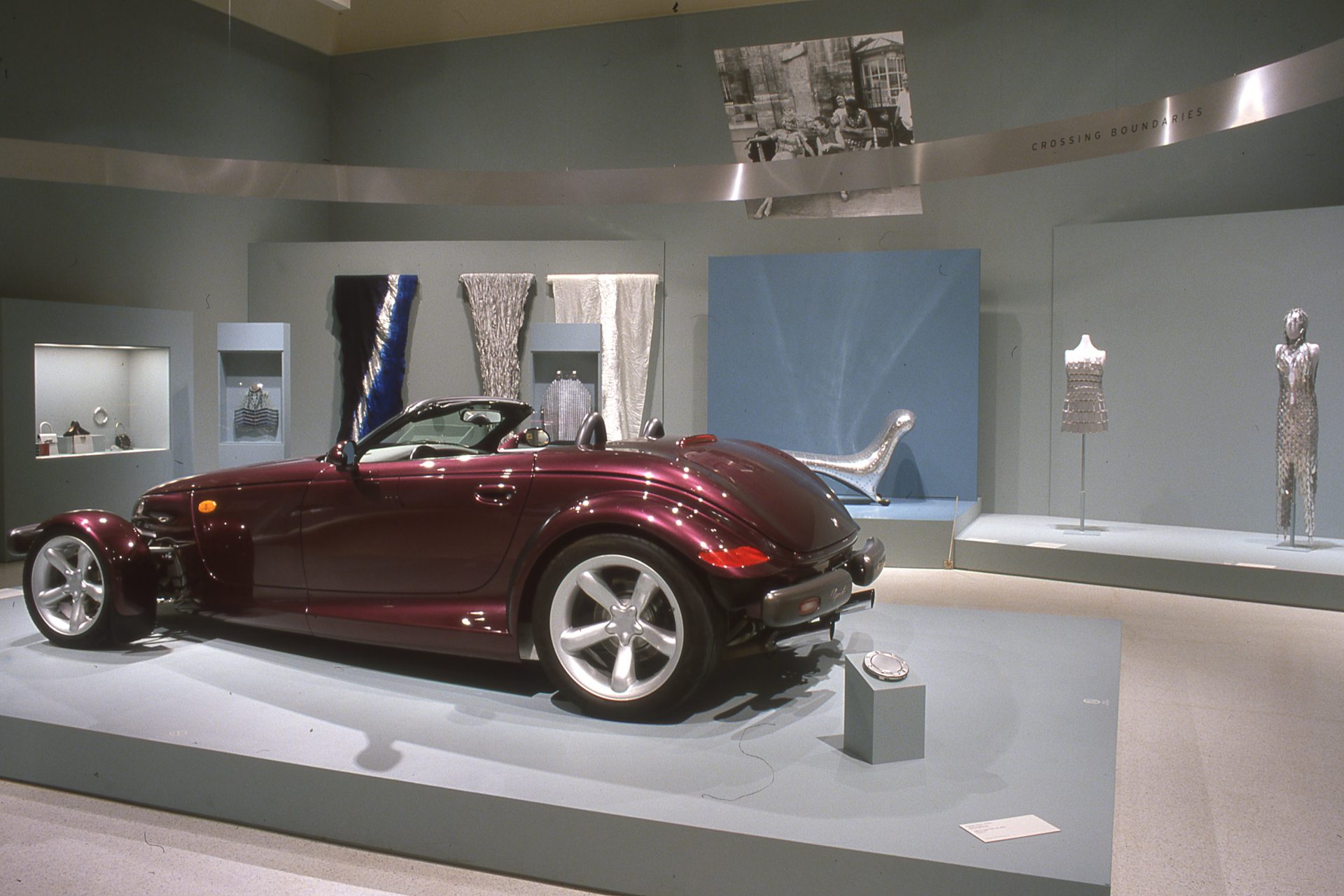 Installation view of Aluminum by Design, 2000, at the Carnegie Museum of Art, Pittsburgh. Photo by Richard Stoner.

Beyond the domain of fashion, Junichi Arai’s textiles connect with broad themes in technology and design thought, being included widely in museum exhibitions. The Museum of Modern Art’s 2004 Inaugural Installation in the new architecture and design gallery included Arai’s tripled pleated and metallic fabrics. The seminal exhibition Aluminum by Design at the Carnegie Museum of Art included Textile: Blue shimmering in the Pittsburgh gallery behind a Plymouth Prowler automobile (1997) and next to an icon of 20th-century design, Marc Newsom’s aluminum Lockheed Lounge (1986). 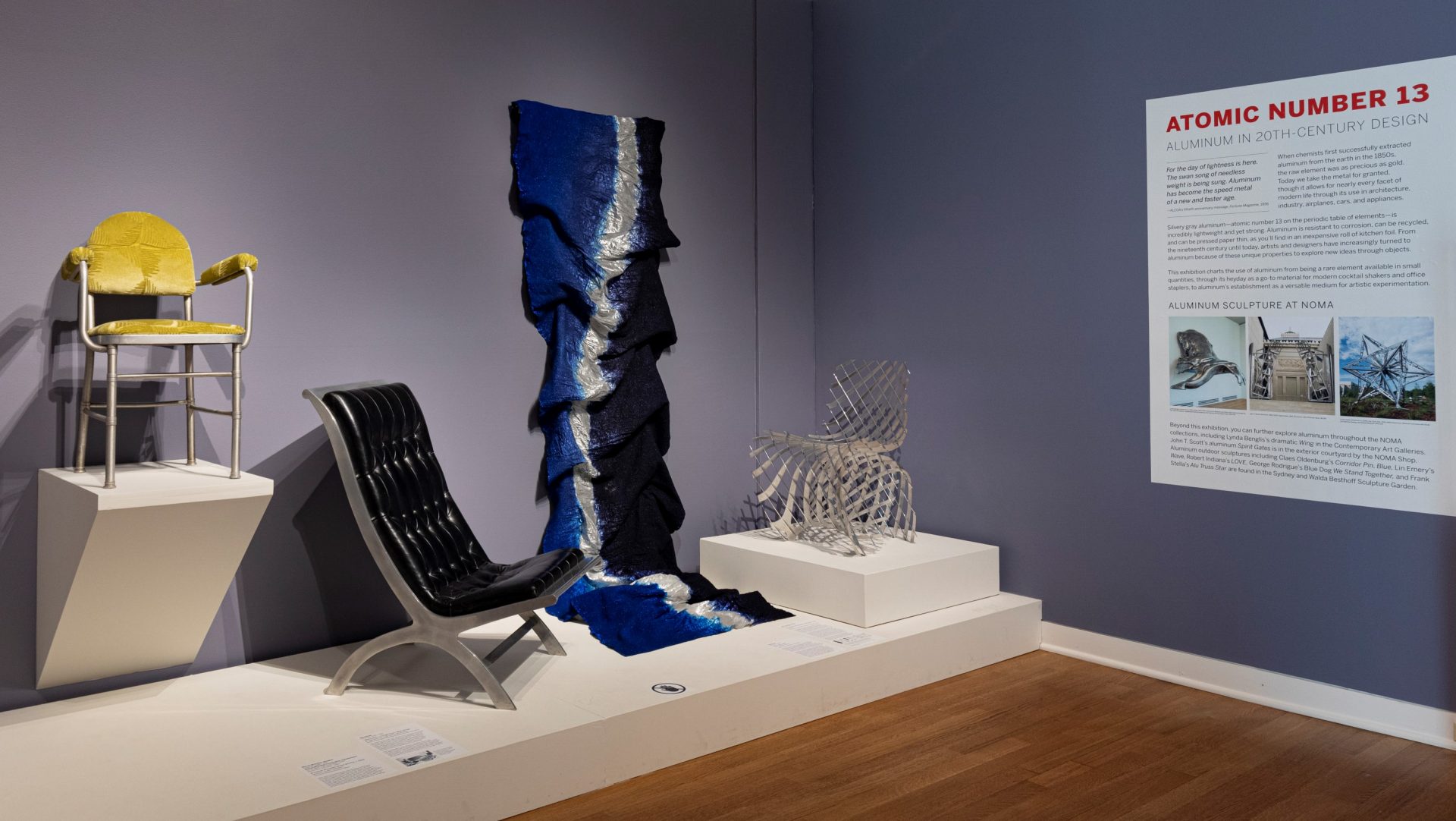 Jun-ichi Arai’s Textile: Blue on view at NOMA in the exhibition Atomic Number 13: Aluminum in 20th Century Design, on view May 2021–April 2022.

At NOMA, the exact same bolt of Junichi Arai’s blue and silver fabric that was on view in Pittsburgh, transferred to New Orleans through museum relationships, is on view in Atomic Number 13: Aluminum in 20th Century Design through April 17, 2022.