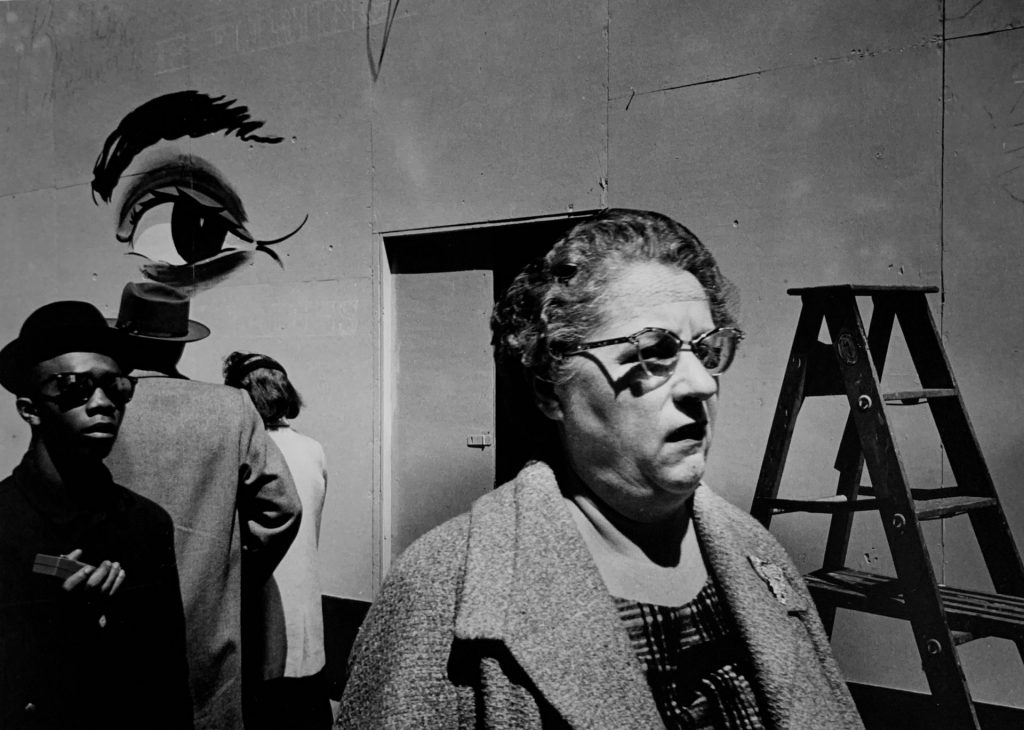 In his long career, Ishimoto Yasuhiro (Japanese, born United States, 1921–2012) photographed a wide variety of subjects, including portraits, still lifes including flowers and plastic-wrapped foods, and abstract studies of color and form. He achieved distinction in Japan for his photography of architecture, which itself ranged from a 16th-century imperial villa to skyscrapers and a monument for the victims of the Nagasaki bombing.

In the United States, Ishimoto is perhaps best known for his street photography—in particular his fascination with the people and environs of Chicago. This photograph is typical of Ishimoto’s street work, in that he most often turned his view perpendicular to whatever street he stood on (as opposed to looking down the thoroughfare towards a horizon) to better to capture the people and buildings that interested him. He rarely staged his photographs, but rather took notice of what was in front of him and carefully composed a picture in his mind.

This particular image is one of several that he made in front of the same painted wall, so we know that he paused there for a while as folks drifted in and out of his viewfinder. It features Ishimoto’s characteristic concern for a balance of shapes and forms within the frame, but also a little bit of chaos. In Ishimoto’s full body of street photography, from picture to picture there exists a tension between the feelings of alienation that can come from walking through a large city, and the warmth that can be felt from contact with fellow humans. This single photograph captures both of those ideas at once, along with Ishimoto’s subtle sense of humor: We see the whole sidewalk, the wall “looks” back at us, and the passersby ignore us both.

Ishimoto took this photograph during his second stay in Chicago, after 1958, while working on a fellowship from the Minolta company. (Minolta released its first 35 mm SLR camera that same year.) He first arrived in the city in 1944, after being released from an American internment camp for people of Japanese descent during World War II, when Ishimoto was not permitted to return to his home in California, despite being a US citizen. Ishimoto chose to go to Chicago and studied photography at the Bauhaus-inspired Institute of Design from 1948 to 1953. In 1961 Ishimoto, emigrated to Japan permanently. His photographs of The Windy City were published in Chicago, Chicago in 1969, the same year that Ishimoto elected to become a Japanese citizen.

To celebrate the 100th anniversary of the birth of Ishimoto Yasuhiro, NOMA is presenting a selection of works from its collection that reveals the artist’s capacity for capturing humanity with both empathy and detachment, as well as his playful sense of humor and skill as a picture-maker.