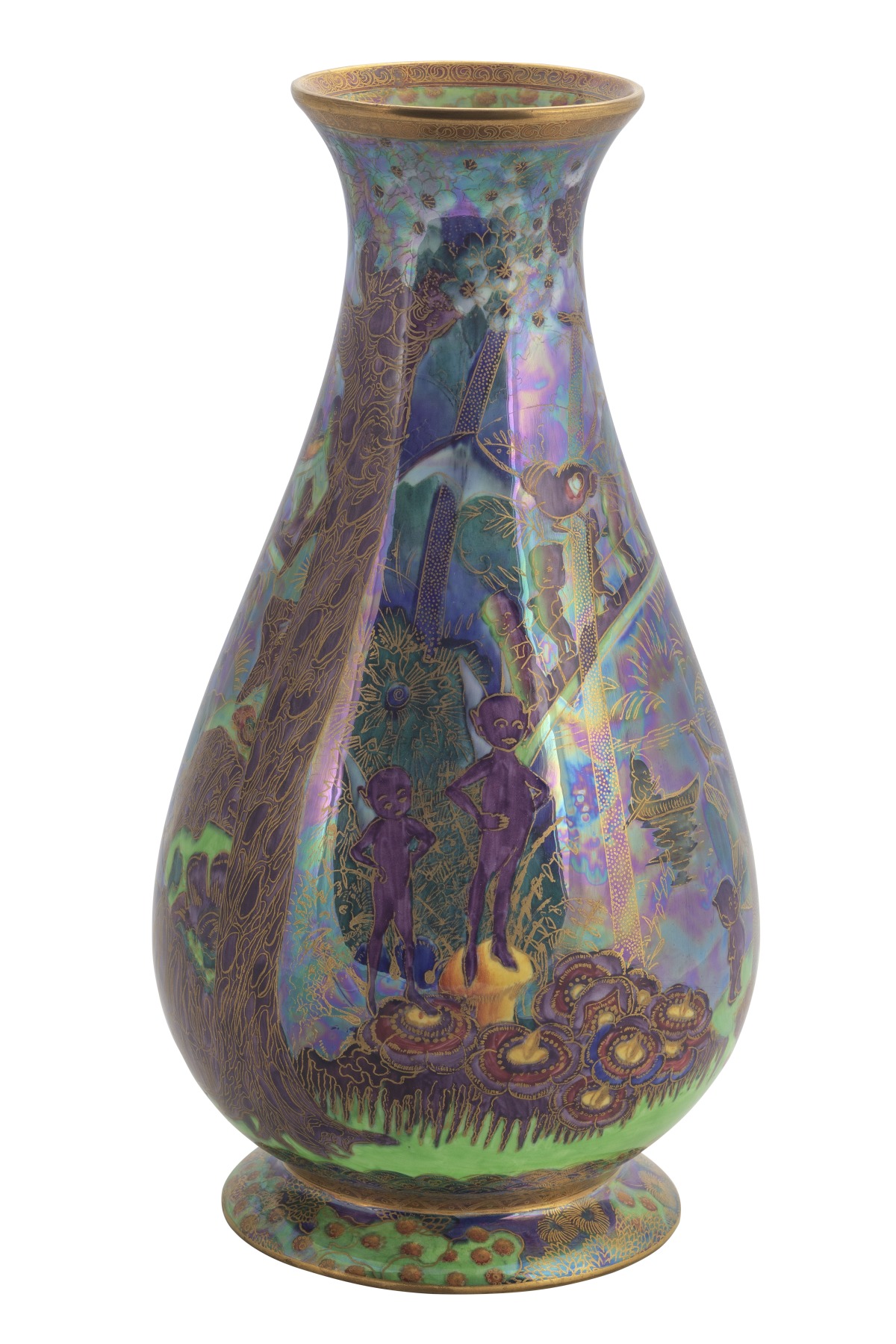 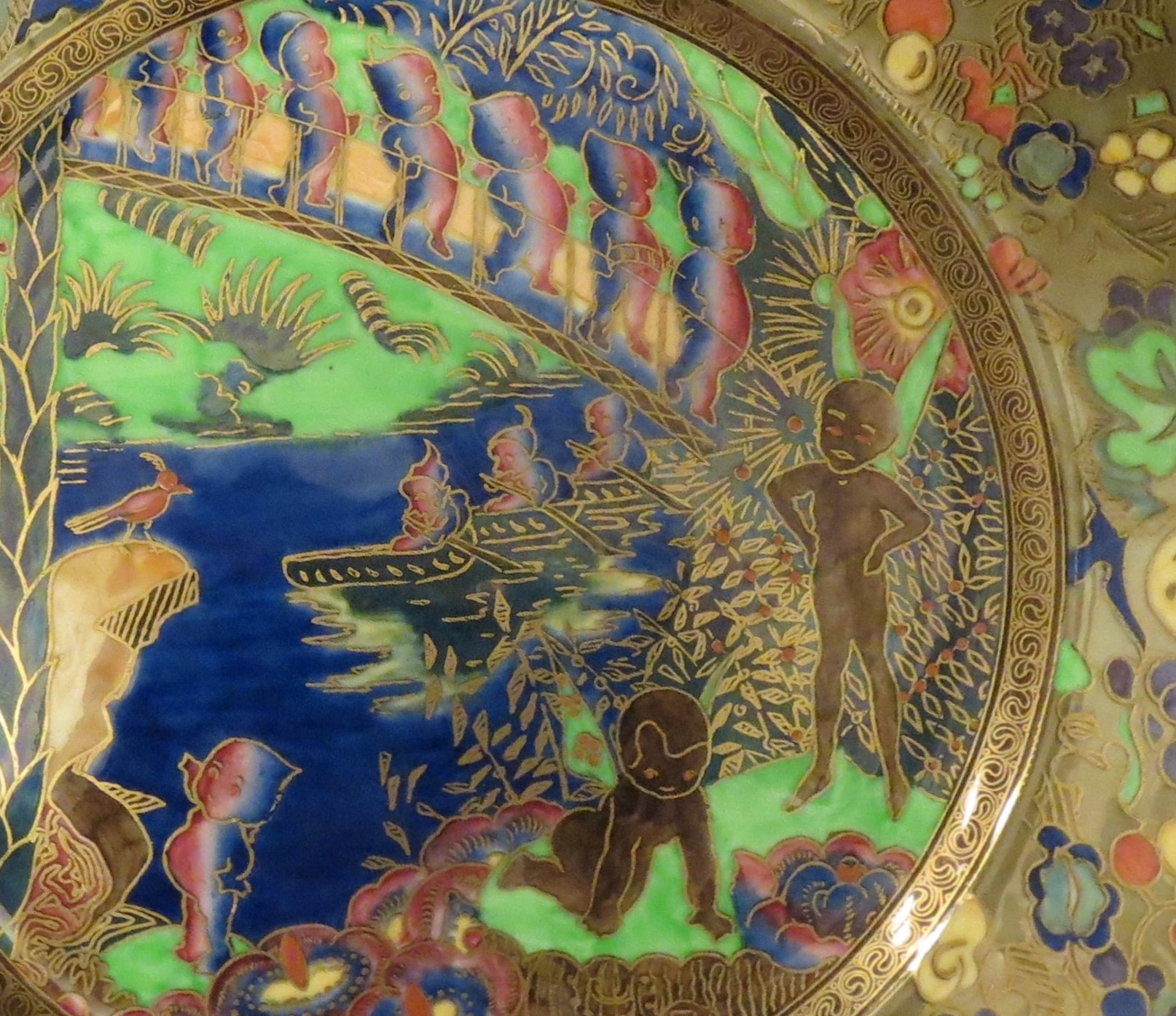 As the upper-middle-class daughter of an English country doctor, Susanna Margaretta “Daisy” Makeig-Jones (British, 1881–1945) was not following an expected life path when she pursued factory work. Though she had an artistic education, including schooling in London, it was highly unusual when she approached a family friend, Cecil Wedgwood, inquiring about a position at the famous Wedgwood ceramic factory. Daisy joined the company’s training program for female painters in 1909 and became one of Wedgwood’s designers by 1914. Makeig-Jones’s imaginative and playful designs for Fairyland Luster were introduced two years later, in 1916. Her conjured world of charming imps and luminous fairies was a sharp contrast to the ongoing conflict of World War I in Europe. In the postwar years, Fairyland became so enormously popular that it revitalized the Wedgwood brand and lifted the ceramics company out of the wartime’s economic slump. 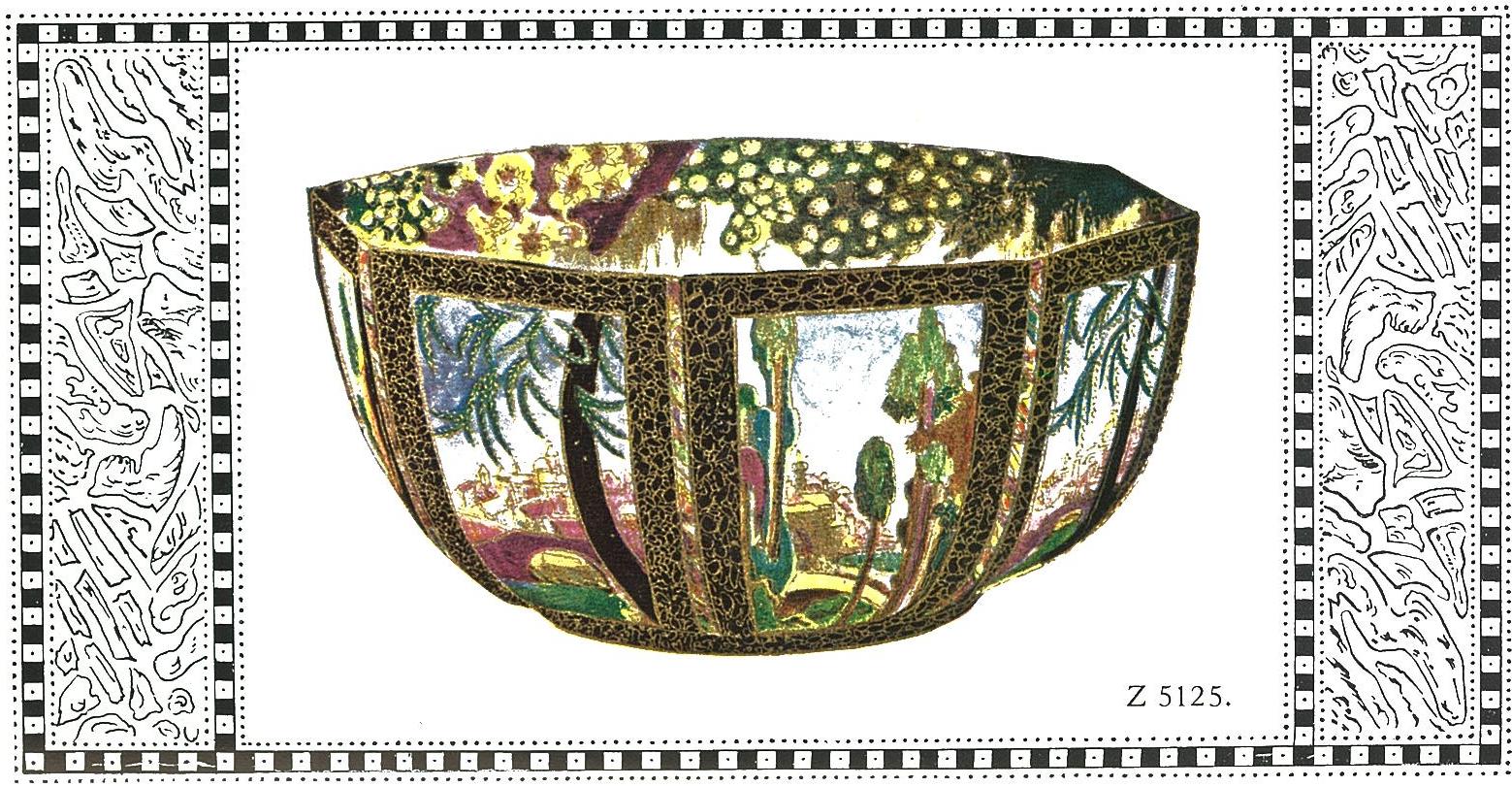 Intricate with detail, Fairyland Luster presents a rich world with characters like “Imps on a Bridge” or “Ghostly Woods” that draw heavily from turn-of-the-twentieth-century children’s literature. Daisy Makeig-Jones explains the quirky world of nymphs and elves in Some Glimpses of Fairyland, shown in the illustration above. In this 1921 marketing pamphlet released by Wedgwood, Makeig-Jones weaves popular children’s tales by Hans Christian Andersen or the Brothers Grimm with fables of her own making. Artistically, she was likewise adept at incorporating inspiration from a variety of sources. Her drawing style and composition pay tribute to H.J. Ford’s illustrations in The Colour Fairy Books published between 1889 and 1910, which Makeig-Jones had read to her siblings as a young woman. 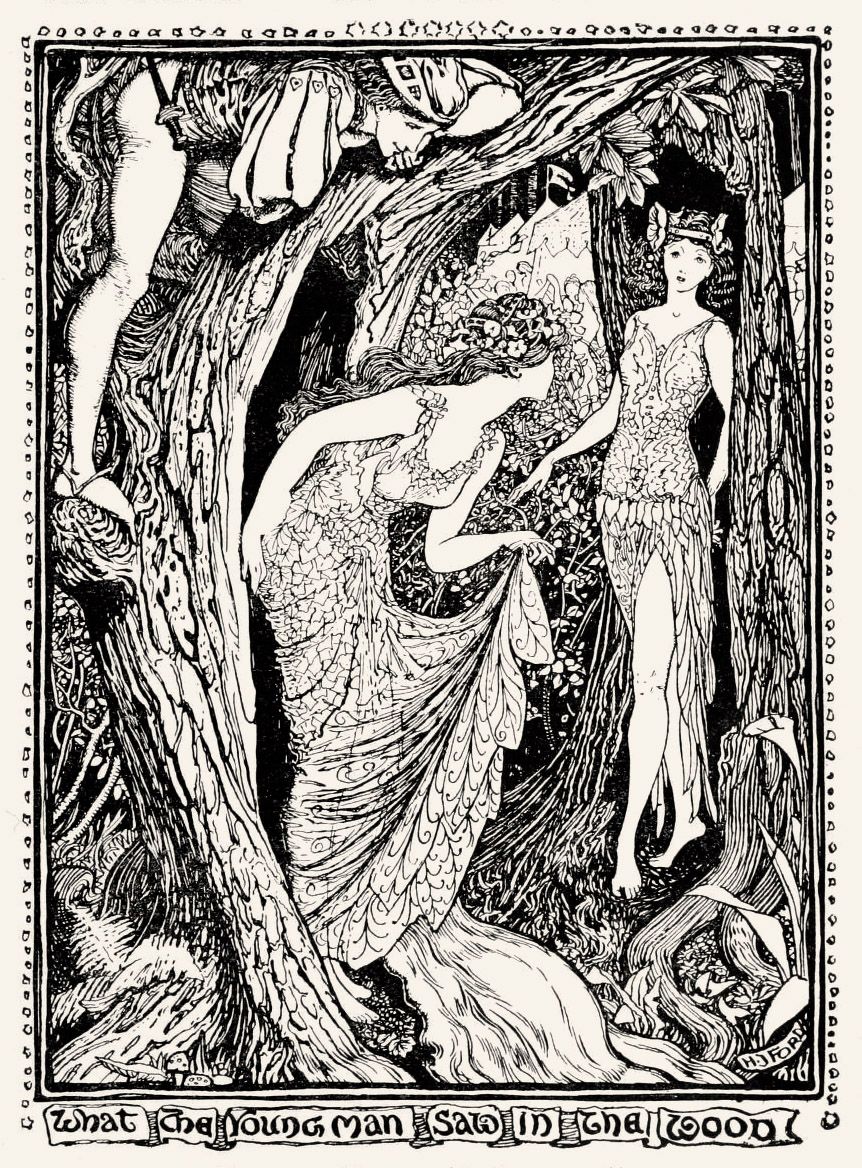 Wedgwood’s name for this line or porcelain, Fairyland Lusterware, refers to the “luster glaze” technique that creates an iridescent surface on the porcelain clay.  Daisy Makeig-Jones and the Wedgwood team experimented widely to achieve and stabilize Fairyland’s complicated rainbow-hued metallics. The luster comes from the addition of metals—silver, platinum, copper, and/or gold—into the glaze recipe. A luster-glazed porcelain pot has been fired in the kiln many times: first to hold its clay shape, again for underglaze colors, and yet another round for an all-over, glass-like lead glaze. The pot was then fired multiple times to build up the metallic glazes for the flame, rainbow, and iridescent effects seen below in the detail of the “Woodland Elves” Bowl in NOMA’s collection. Each firing in the kiln became progressively cooler in temperature, ending with the final addition of gold. The gilded details were fired at the lowest setting, allowing the gold to set in place but not burn away. Under Daisy Makeig-Jones’s direction, Fairyland Luster expanded Wedgwood’s palette of luster glazes, resulting in one of the most colorful expressions of this time-consuming, highly crafted, and therefore expensive, porcelain decorative technique. 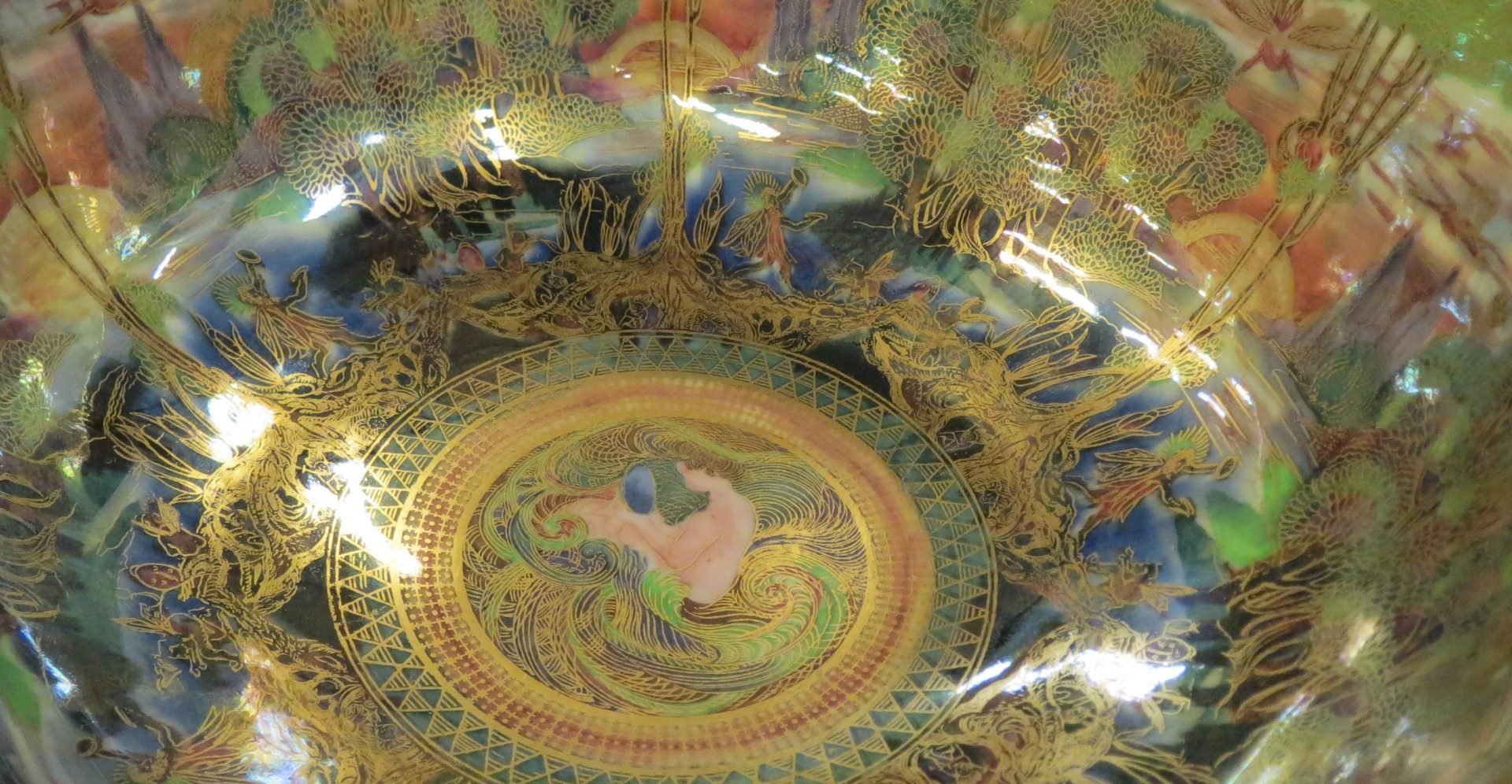