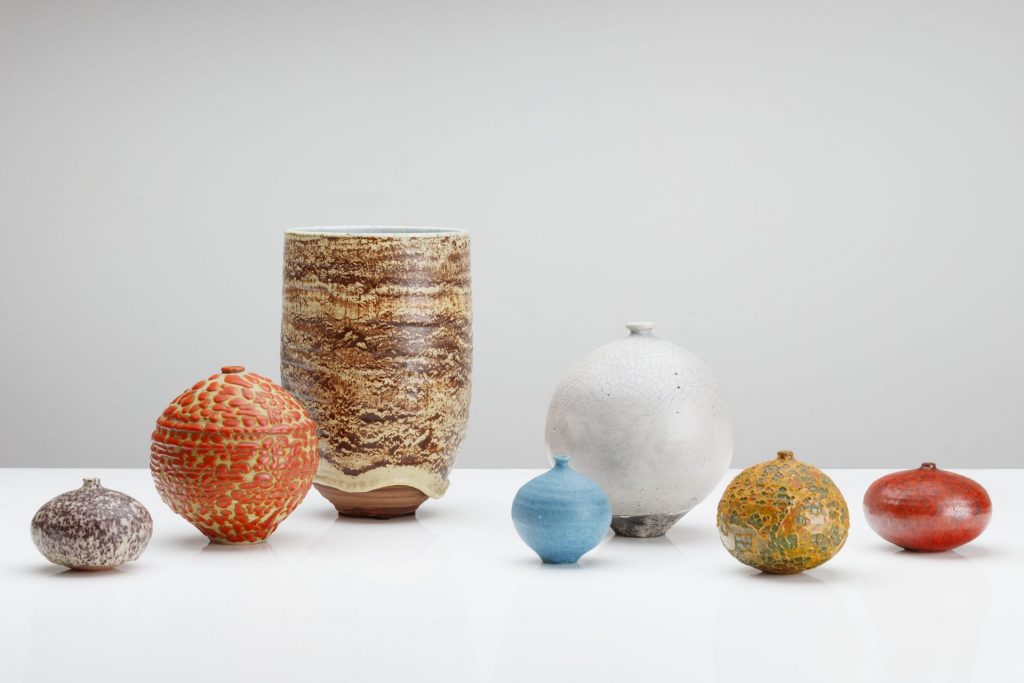 Vibrant glazes bubble lusciously, crack sharply, and drip dangerously off the edges of these meticulous little “Weed” Pots by Doyle Lane. In late 2021, the New Orleans Museum of Art welcomed into the permanent collection these seven extraordinary works by Doyle Lane, including two that come as a gift from NOMA Director Emeritus John Bullard’s exemplary collection of American Studio Ceramics. These pots become the first works by the celebrated Black Los Angeles potter to join a public collection in the artist’s birth city. 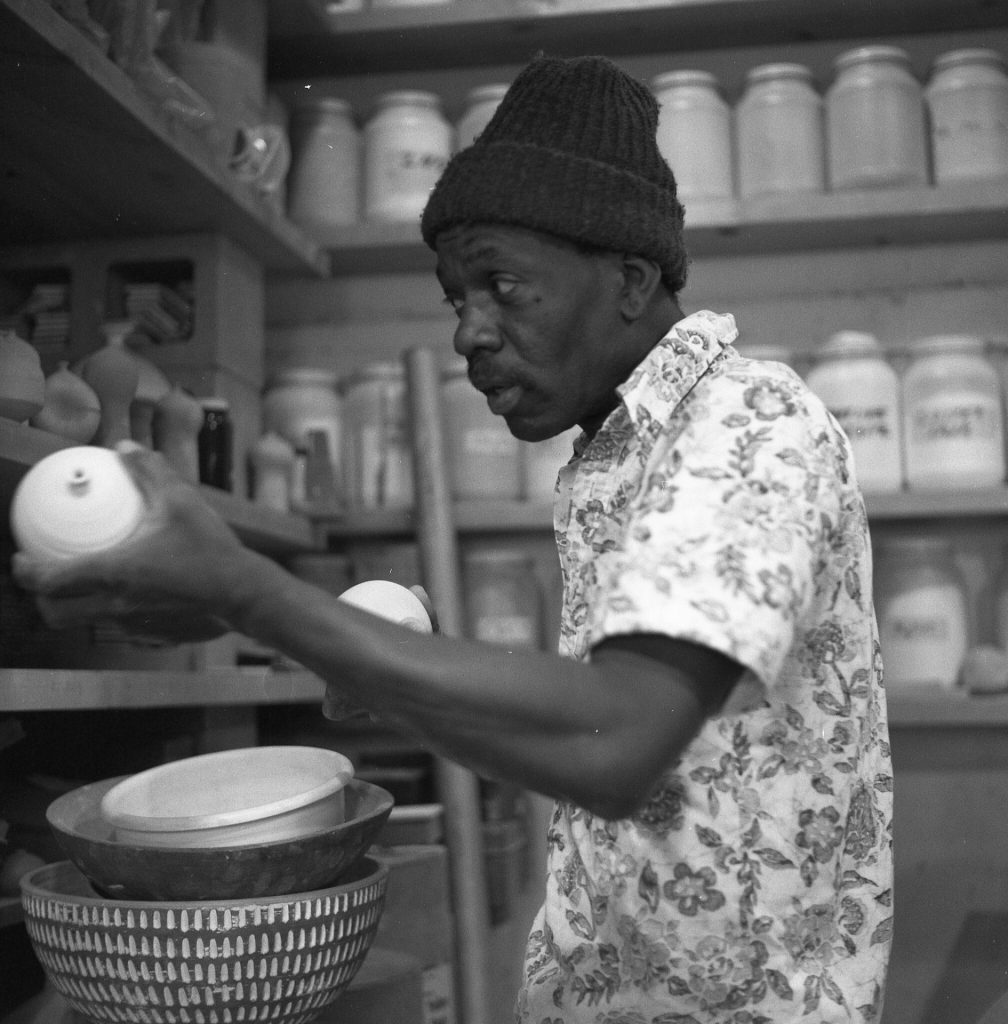 Born in New Orleans, Doyle Lane, like other Black artisans of his era, followed the promise of greater opportunities outside the segregated American South. Lane is listed as a student in a 1947 New Orleans city directory—living on S. Johnson Street in the Central City neighborhood—but by the later 1940s he was in Southern California. Lane continued his education at Los Angeles City College, East Los Angeles College, and the University of Southern California. As a classmate or student of potters like F. Carlton Ball, Ken Price, Vivika Heino, and Glen Lukens, Doyle Lane was part of a network of artists in California exploring new forms of expression through clay.

Early in his career, Doyle Lane honed his scientific knowledge working as a glaze technician with the chemical supplier L.H. Butcher Company. For most of his career, quite notably, Doyle Lane was one of the few Black artists in Los Angeles in the 1960s through 1980s who made their living through artwork alone. Lane maintained a home and studio in the El Sereno district of East Los Angeles and sold his pots directly to collectors, while also pursuing large-scale commissions directly with architects. 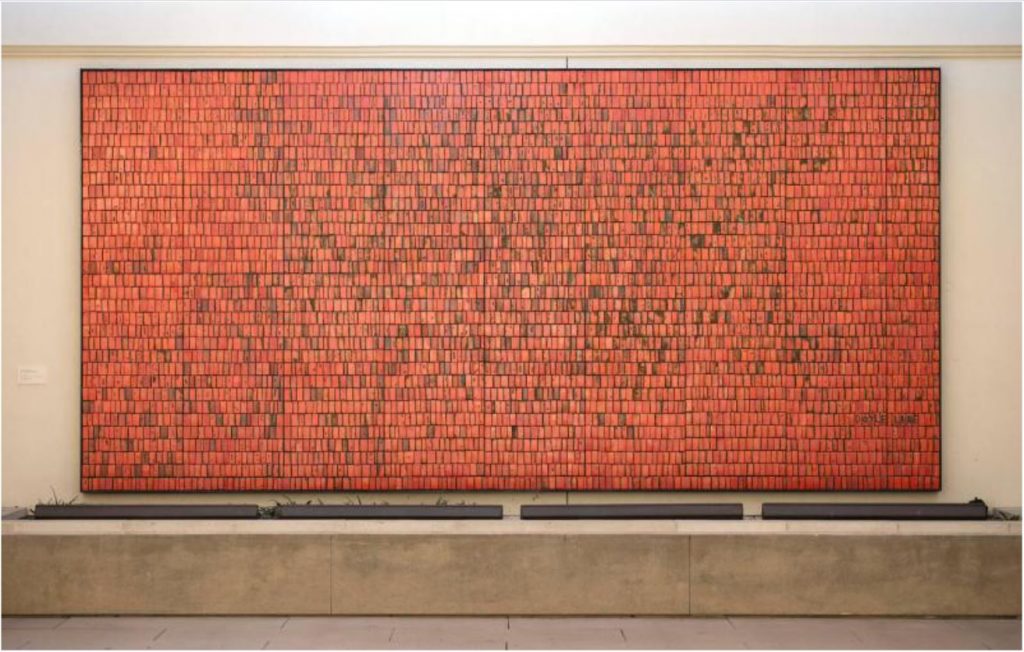 California’s Huntington Art Museum collection includes a monumental ceramic mural that demonstrates both Lane’s technical and artistic expertise. In 1964 architect Welton Becket commissioned Lane to make a 17-foot mural for the Pasadena branch of the Mutual Savings and Loan Association. The ceramic tiles showcase a range of Lane’s signature orange-red glazes, and are positioned in irregular grids and at irregular depths to emphasize the play of light and shadows on the warm glaze.

Doyle Lane might have called his mural a “clay painting.” Lane’s use of this term purposefully positions his ceramics as works of art beyond the traditions of useful clay teapots and vases, and emphasizes it instead as a vehicle for artistic experimentation in light and color. In 1969, when a “clay painting” was included in the landmark Objects USA traveling exhibition of American craft, Lane mused in the catalog: “Why not take paintings out of doors where one might sit and watch the changing play of sunshine on the glazes, and thus have changes of mood during the day?” That “clay painting” from Objects USA, Lane’s 1967 Landscape #9, is in the collection of-—and currently on view in—the Smithsonian American Art Museum. 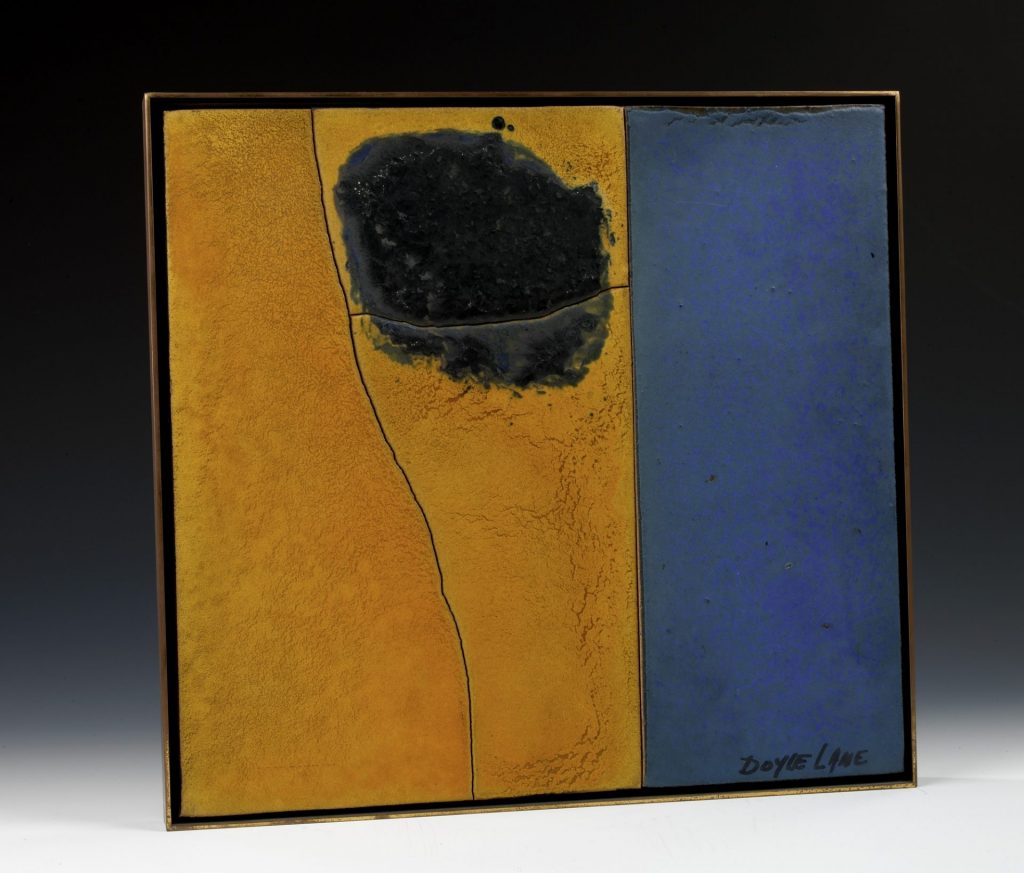 Doyle Lane’s diminutive “weed” pots (so named for the tiny opening that showcases a single stem) demonstrate his experimental glazes, but as noted by Lane in a rare Studio Potter interview of 1981, there was “no secret, just work” in his glaze recipes. Lane noted the careful processes that went into both clay and glaze, and how the results varied depending on firing times, how the pots were stacked in the kiln, or even on the weather. On his famous vivid red glazes, like on the 5,000 orange-red tiles of the Huntington’s mural or on several pots in NOMA’s collection, Doyle Lane admitted “The reds are tricky, and you could write a whole thesis on them.” 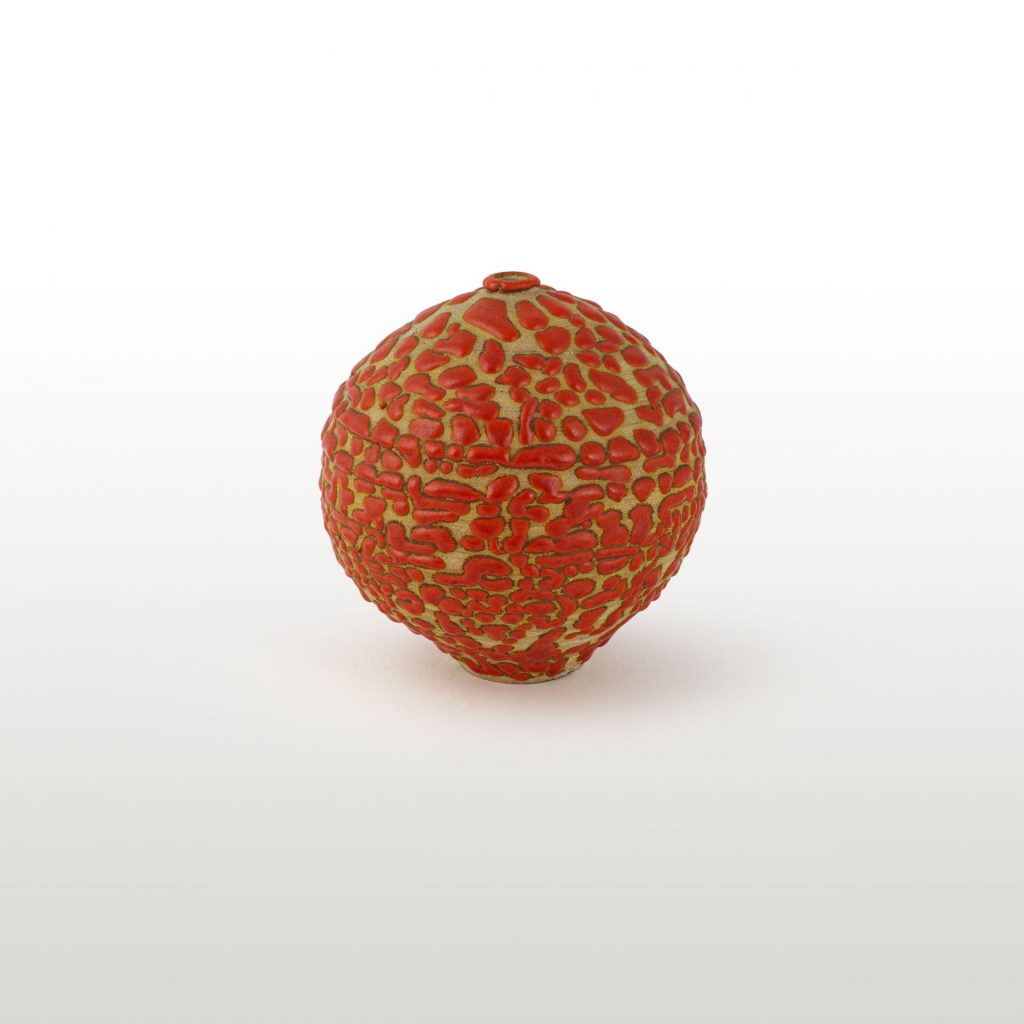 Several Los Angeles galleries founded during the Civil Rights and Black Arts movements were avid supporters of Doyle Lane’s pottery, including Ankrum Gallery and Brockman Gallery, which operated from 1967 to 1989 championing the work of Black artists. Gallery owner Dale Brockman Davis spoke about his relationship with Lane in “Bright Glazes, Black Art: A Conversation on Doyle Lane,” a 2021 online conversation with LACMA curator Staci Steinberger. In that conversation, Brockman Davis noted that Lane first became involved with his gallery right around 1970, after which Lane’s clay bead necklaces and “weed” pots were offered at holiday shows where “people were ready to spend money.” Brockman Davis notes that Lane’s saleable crafts kept the gallery solvent, allowing their work to give vital exposure to artists with limited opportunities in the Los Angele art scene, namely Black artists but also including women and Korean artists. 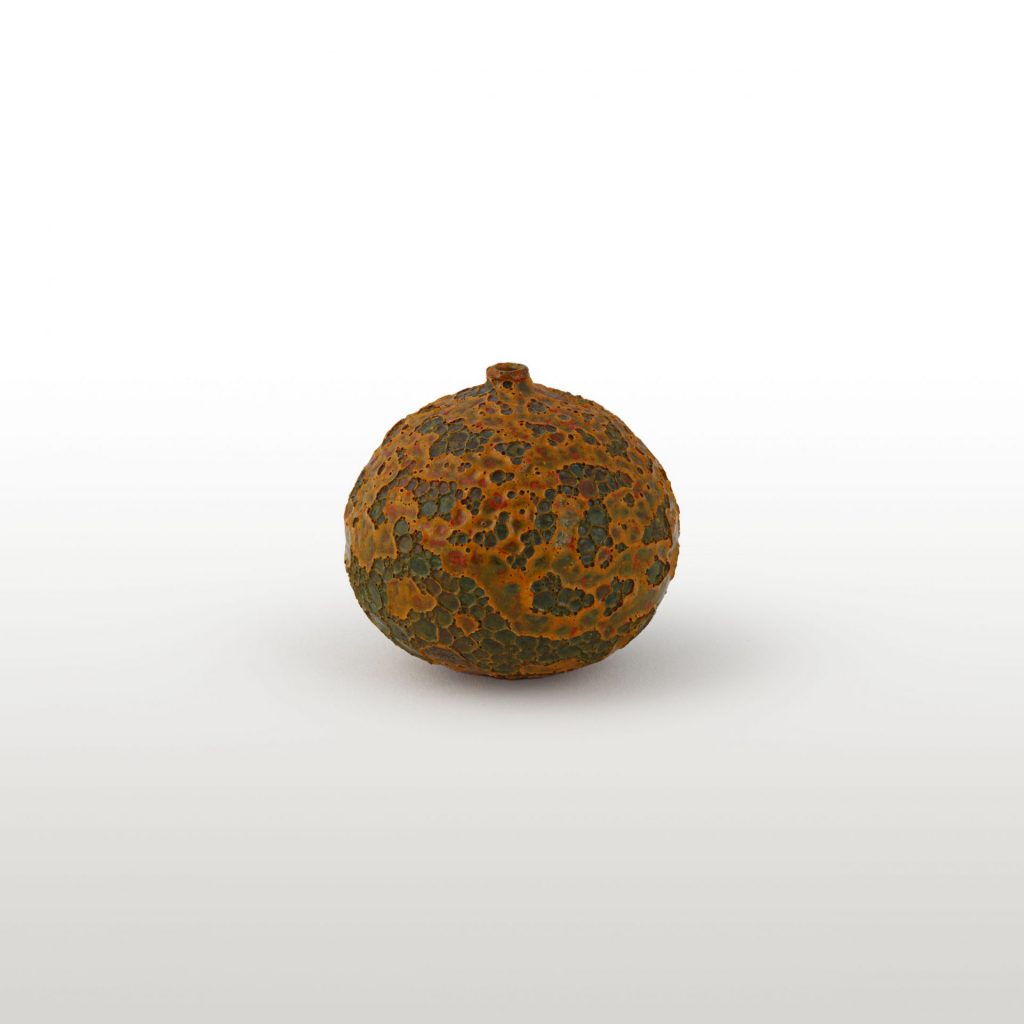 Though looking back, it was clear he was under-recognized during his lifetime, Doyle Lane enjoyed both steady support during his long career and a flowering of posthumous recognition. Doyle Lane was included in an important 1970 exhibition California Black Craftsmen at Mills College Art Gallery and in 2020 his “weed” pots were the focus of an exhibition at the Los Angeles David Kordansky Gallery.  That presentation of sixty pots was called “ravishingly seductive” by The New York Times.

LACMA’s exhibition California Design, 1930-1964: Living in a Modern Way (2011), Crafting America at the Crystal Bridges Museum of American Art (2021), and Objects USA: 2020 at NYC’s R & Company Gallery (2021) all included Lane in telling the story of American craft and design of the twentieth century. In addition to LACMA and the Smithsonian American Art Museum, the artist’s work is held in the permanent collections at the Oakland Museum of California, the California African American Museum, and now the New Orleans Museum of Art.

As of March 29, 2022, all seven of NOMA’s Doyle Lane pots are on view in the Museum’s second floor Lupin Foundation Galleries of Decorative Arts & Design.