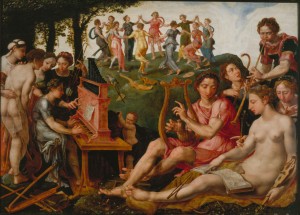 By the 1540s the theme of Apollo and the Muses, established during the sixteenth-century Italian Renaissance, had made its way to northern Europe where Maerten van Heemskerck seems to have been one of its champions. Heemskerck was one of the first Dutch painters to travel to Italy for art studies after which he devoted his career to propagating the style in his northern homeland. The somewhat crowded quality of this composition is typical of Heemskerck’s images. The crowding, as well as the monumentality of his figures, reflects the work of Michelangelo, the most overwhelming influence from Heemskerck’s trip to Italy.

In ancient times the singing and dancing of the nine Muses were believed to inspire mortal singers and poets and to incite them to noble deeds. The harmonious tones and rhythmic singing of the Muses purified the spirit and kept the human soul properly balanced. The association of Apollo gave a dimension of scholarship to this allegorical interpretation. Thus the Muses’ activities became the proper way of exercising intellectual pursuits. A product of this is that moral standards are improved and vices, notably lust, are avoided. In Heemskerck’s time, the Muses were designated as guardians of honest and good knowledge.

The musical aspect of Heemskerck’s interpretation is emphasized by the prominent position of the organ. It is not a specific antique instrument, but instead acts as a symbol of ars musica in general. No doubt Heemskerck presents the harmony of this concert of Apollo and the Muses as an allegory of the ennobling virtues that derive from a knowledge of the arts.

This Object Lesson, written by Sharon E. Stearns, is adapted from the New Orleans Museum of Art Handbook, available for purchase in the Museum Shop. Apollo and the Muses is on view in the first-floor Dutch art galleries.