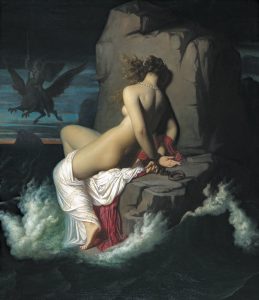 Léopold Burthe’s Angelique is a recently rediscovered masterpiece by a native New Orleanian who lived and painted in Paris in the 1840s and ‘50s. Presented at the Paris Salon of 1852, Angelique depicts a scene from the sixteenth-century Tuscan poem The Song of Roland by Ludovico Ariosto, a story commonly represented in French painting in the eighteenth and nineteenth centuries. Angelique has been chained to a rock and a sea monster threatens to attack just as the knight Roland, visible in the background astride a hippogriff, arrives to save his beloved. Burthe’s painting reworks a famous composition of 1819 by his friend Jean-Auguste Dominque Ingres (1780–1867), now in the collection of the Louvre, and as such aligns his art closely with Ingres’s style and reputation.

Born in 1823 in New Orleans, Burthe appears to have been sent to France as an adolescent with his sister when yellow fever threatened the city. His father, Dominique François Burthe of Metz, France, came to Louisiana sometime before the 1803 Louisiana Purchase as an envoy of the Ministry of War. He married Louise Delord Sarpy, of prominent New Orleans parentage, in St. Louis Cathedral on May 8, 1805, and created a namesake Faubourg Burtheville settlement, presumably near present-day Burthe Street in the Uptown neighborhood of Carrollton. The couple also owned and lived for a period at 534 Howard Avenue, now lost. A graphite portrait drawing of Burthe by fellow artist Theodore Chassériau, preserved at the Rhode Island School of Design Museum, presents an elegant young man. Burthe is a fascinating figure and subject of ongoing research.

Following the Neo-Greek style of his Parisian teacher, Eugène Amaury-Duval, Burthe’s academic style focuses on single-figure tragic heroines staged in stylized, fixed poses silhouetted against stark backgrounds. A rocky outcropping foregrounds and positions Angelique, the saturated green sea luminous at her feet. The representation of Angelique from behind is an unusual choice and the pose a deft demonstration of skill, where the graceful lines of her torso, hip, and legs are counterbalanced by rounded shoulder blades, draped arms, and resting hands. The lapping, foamy waves and exuberant hair combine with the orange setting sun to heighten the dramatic tension.

Only seven other paintings by Burthe are known, marking this rediscovery as a major event. Found by an art dealer in a small shop in the south of France several years ago, the dirt-coated painting was cleaned to glorious result and its condition is pristine, likely because it may have remained with the same hands for generations. The lost masterpiece is proudly signed by Burthe and also identified by a lithograph reproduction of the 1852 Paris Salon.

Newly installed in the Forgotston Gallery, the work has enhanced NOMA’s presentation of the art of this era. The work reorients the gallery to introduce the importance of the female nude as allegory in French academic painting and corresponds with three other works in the gallery that are later manifestations of and reactions to academicism. Formerly unknown to New Orleanians, Burthe’s talent has been brought into the spotlight by this superb, rare example of his art.

Read more about the donors, Michael and Susie McLoughlin, in this related feature story.