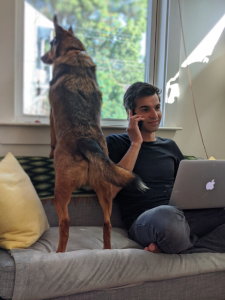 Art handler Tim Morales has spent much of the museum’s shutdown making phone calls to Museum Members. He was joined by his dog Cotton.

Tim Morales is among the staff at NOMA who largely work behind-the-scenes in the day-to-day operation of the museum. As a preparator and art handler, his job is to safely install works for display or prepare them for storage or shipment, typically down out of view from visitors. During the stay-at-home mandate established to flatten the curve of Covid-19, he became part of a team of colleagues who made it their mission to call every NOMA Museum Member. The effort is ongoing. He shared his thoughts about this divergence from his traditional work.
It was really great to speak with members and realize how much the public appreciates this institution. It is something I find myself taking for granted from time to time, so it was very refreshing to have conversations with the people that visit and help support NOMA.
One member shared her favorite painting with me. It’s of the little boy blowing bubbles in the Dutch Gallery. She said that to her it was reflective of the current state of the world with how fragile everything has become—like a bubble. 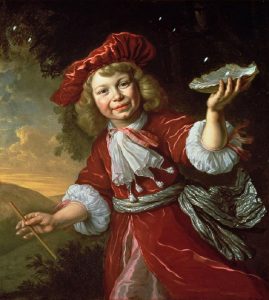 One member who I spoke with for half an hour enjoyed the call and asked me to check in on her in a week. She talked about her family and NOMA. She loved watching the museum expand over the years. She remembers NOMA well before the Besthoff Sculpture Garden opened. When I called back, she had not been able to look at NOMA online because she had been busy sewing masks for friends and family and staying in touch with her kids, grandkids, and great-grandkids who are spread across Europe and North America. Luckily, she has some children that live in the city and they’ve been helping to bring her groceries and other essentials. Also, I believe it was this woman who mentioned what it’s like interacting with her young grandchildren and great-grandchildren. She said it’s difficult not hugging them and feels bad for them because some feel neglected or ignored because she can’t give them the attention they are used to.
Another member I spoke with talked with me about how her and her husband have been passing time. Lots of two-person card games, she said. When I mentioned that my wife and I were piecing together jigsaw puzzles, she got excited and started telling me about all of the puzzles of famous paintings she has completed, some of which she has framed in her house.
I called Susan Bergman and as the phone was ringing I recalled her name! She has artwork for sale in the Museum Shop and I love her work. We spent quite a while on the phone chatting about NOMA, some of her pieces in the shop, how she got into ceramics, and what her studio practice is like, among many other things. She was surprised by the phone call and we both really enjoyed the chat.