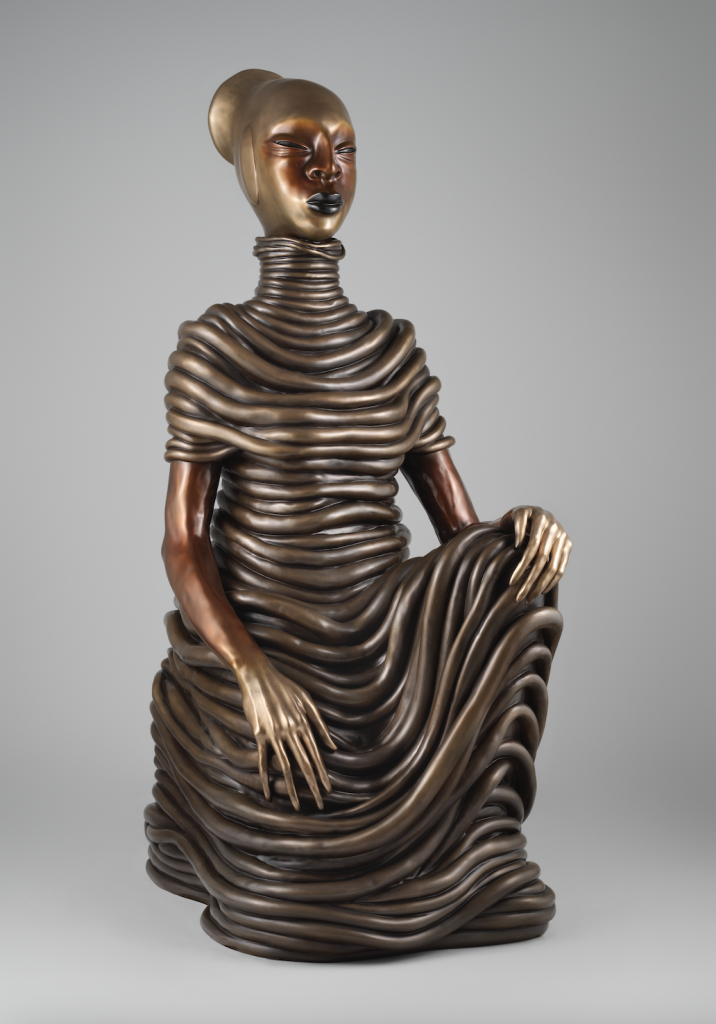 NEW ORLEANS – The New Orleans Museum of Art (NOMA) announces the addition of The Seated III, a sculpture by contemporary Kenyan-American artist Wangechi Mutu, to the Sydney and Walda Besthoff Sculpture Garden. The 12-acre garden is home to more than 90 sculptures representing the 19th century to the present, and is open to the public Wednesday through Sunday, 10 a.m. – 5 p.m.

The Seated III is one of four sculptures created by Mutu originally for, and in response to, niches on the façade of The Metropolitan Museum of Art as part of a commission titled The NewOnes, will free Us. Widely regarded as one of our foremost contemporary sculptors working today, Mutu’s kneeling female figures are inspired, in part, by the global history of female load-bearers, or caryatids, that exist across Greek, African, American, and European art. While caryatids are traditionally depicted as carrying the weight of architectural or decorative forms, often taking the place of a column or pillar, Mutu’s figures are liberated from that weight, allowing them to come into full possession of their own power. The Seated III honors the ways in which women, and particularly Black women, are often culture bearers, standing guard over, and protecting, their cultural history.

“This significant work by Wangechi Mutu takes its place within the garden landscape as yet another point of conversation and contemplation for our visitors,” said Susan Taylor, NOMA’s Montine McDaniel Freeman Director. “While on view at The Met in New York, Mutu’s figures invited visitors to rethink the history of the museum’s collection, the historic tradition of facade sculpture and the role of Black women in society. In NOMA’s Besthoff Sculpture Garden, The Seated III will have a similarly dynamic relationship to the museum’s history and collection.”

Born in 1972 in Nairobi, Kenya, Mutu’s work has been exhibited at galleries and museums worldwide including the Museum of Modern Art in New York, the Museum of Contemporary Art in Los Angeles, the Miami Art Museum, Tate Modern in London, Centre for Fine Arts in Brussels, the Studio Museum in Harlem in New York, Museum Kunstpalast in Düsseldorf, Germany, the Centre Georges Pompidou in Paris, and the Nasher Museum of Art at Duke University.

The New Orleans Museum of Art, founded in 1910 by Isaac Delgado, houses more than 40,000 works of art encompassing 5,000 years of history. Works from the permanent collection, along with continuously changing special exhibitions, are on view in the museum’s 46 galleries Wednesday through Sunday, 10 a.m. to 5 p.m. The adjoining Sydney and Walda Besthoff Sculpture Garden features work by more than 90 sculptures, including works from several 20th and 21st-century master sculptors. NOMA’s Besthoff Sculpture Garden is open to the public Wednesday through Sunday, 10 a.m. to 5 p.m. The New Orleans Museum of Art and the Besthoff Sculpture Garden are fully accessible to visitors with disabilities. Wheelchairs are available from the front desk. Museum admission is free on Wednesdays for Louisiana residents, courtesy of The Helis Foundation. Children 12 and under receive free admission. Teenagers (ages 13-19) receive free admission courtesy of The Helis Foundation.