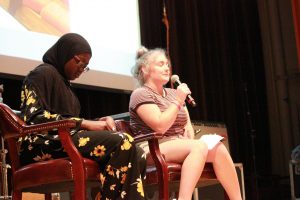 Two women participate in a Story Exchange as part of a Night of Literature and Music hosted by Narrative 4 at NOMA in July 2019. Photo by Karlas Powell

Narrative 4 (N4) is a nonprofit global network of educators, students, and artists who use art and storytelling to build empathy between students while equipping them to improve their communities and the world. The organization has partnered with NOMA since 2018. Tracy Kennan, Curator of Education, shares her observations in this essay.

When we think of storytelling, we often remember imaginative or mythological tales told in a captivating manner. It is certainly true that the talents and embellishments of a storyteller can captivate listeners while providing the essential role of maintaining oral traditions within a culture. My grandmother told a wonderful, humorous story about a little boy who took directions in a children’s tale too literally and stepped in all of his mama’s pies. Perhaps you remember hearing that story, too? But my favorite stories that she told were true autobiographical stories from her life that allowed me to learn more about her.

Narrative 4 (N4) understands the power of a personal story and how it can connect people across location, experience, and generations. This global nonprofit organization adapted the process of the Story Exchange, by which two individuals come together and tell each other a true story from their life and then retell their partner’s story in the first person. N4 is an international organization dedicated to building empathy with a goal of inspiring young people to turn that verbal connection with others into positive action.

I have had the opportunity to work with Narrative 4 on several occasions over the past three years. Local artist Monique Verdin suggested that NOMA might collaborate with Narrative 4 in January 2018, when N4 co-founder Lisa Consiglio traveled to New Orleans to plan the organization’s summer Global Summit. The Summit would take place mostly at Loyola University, but Lisa was looking for a place to host a Community Story Exchange and a Night of Literature and Music. Attendees of the Global Summit were coming from across the United States, Ireland, South Africa, and Israel, and they were all familiar with the Story Exchange process, but the Community Story Exchange would introduce the process to New Orleanians—especially teachers and others who work with youth—so that they could witness the power of hearing their own stories told by another person as if it were their own. This would hopefully expand the community of practitioners using this technique.

After an initial meeting and tour of NOMA, we worked out a plan that involved using works of art from the museum’s collection to provide a common experience for more than 130 participants of the Community Story Exchange in July 2018. Because stories form the foundation and the heart of N4, the organization has identified that most stories people share generally fall within five overarching themes: environment, violence, immigration, identity, and faith. Using these themes as inspiration, we selected works of art for everyone to observe on short tours before the group gathered in subsets of ten to twelve individuals to take part in the Story Exchange. NOMA education staff members and volunteer docents guided the groups through the galleries and facilitated conversations. Each work of art was meant to spark a feeling or a memory that might prompt a story that would be shared. Even if the shared stories did not relate to the selected art, we hoped that the visual experience would serve as a reminder that stories can be told and received in many ways. 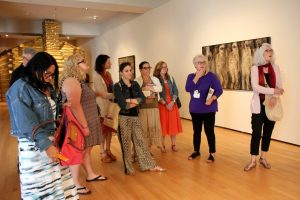 Participants in a Narrative 4 Community Story Exchange at NOMA in July 2019 toured the galleries as part of an exercise to spark ideas about storytelling. Photo by Karlas Powell

Since that first collaboration between NOMA and the Story Exchange, I have continued to nurture a relationship between the museum and Narrative 4. NOMA has hosted two training sessions for people interested in facilitating the Story Exchange method, and we’re encouraged to see educators engaging in this practice with their students. N4 returned to New Orleans in 2019 for yet another Global Summit, and we again hosted a Community Story Exchange and a Night of Literature and Music at NOMA that was open to the public, which included readings by Darryl Bourque, Ishmael Beah, and Colum McCann, along with music by Bruce Sunpie Barnes. 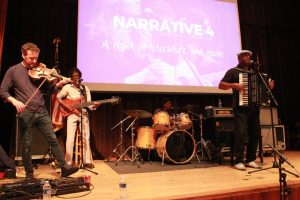 Bruce Sunpie Barnes, at far right, performed as part of a Narrative 4 Night of Music and Literature at NOMA in July 2019. Photo by Karlas Powell

Narrative 4 understands that stories are the heart of our humanity, and though often expressed through dance, music, visual art, and literature, sharing a story can also be as simple as sitting down face-to-face and telling a life experience that is true to the teller. It is powerful to take on someone else’s story as your own, and the retelling is just a potent for the listener as it is for the teller. Those stories that were told to me many years ago by my grandmother are a part of my story, and now I take on the responsibility of sharing them, too.

To learn more about Narrative 4 visit their website at www.narrative4.com. 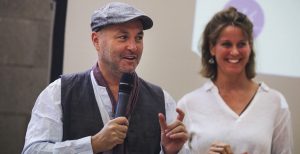 Colum McCann, cofounder of Narrative 4 (N4) has said, “The one true democracy we have is storytelling. It goes across borders, boundaries, genders, wealth, race — everyone has a story to tell.” Photo courtesy of Narrative 4