Ilse Bing, one of the twentieth century’s greatest photographers, had a special relationship with the New Orleans Museum of Art and its staff. In 1976, NOMA acquired its first photograph by Bing, an act that began a chain of correspondence between the artist and then Curator of Photography Tina Freeman.

Over the next several years, NOMA acquired two dozen works by the artist, organized a major retrospective titled Ilse Bing: Three Decades of Photography, and hosted Bing for a lecture on her work. Perhaps most charmingly however, Bing often sent holiday cards to Freeman at NOMA. Sometimes these cards included actual photographs, pasted onto beautifully letterpressed paper stock, and sometimes they were more casual—a fragment of a collage with a hand-written note or a folded Xerox of one of her photographs. They were always clever. 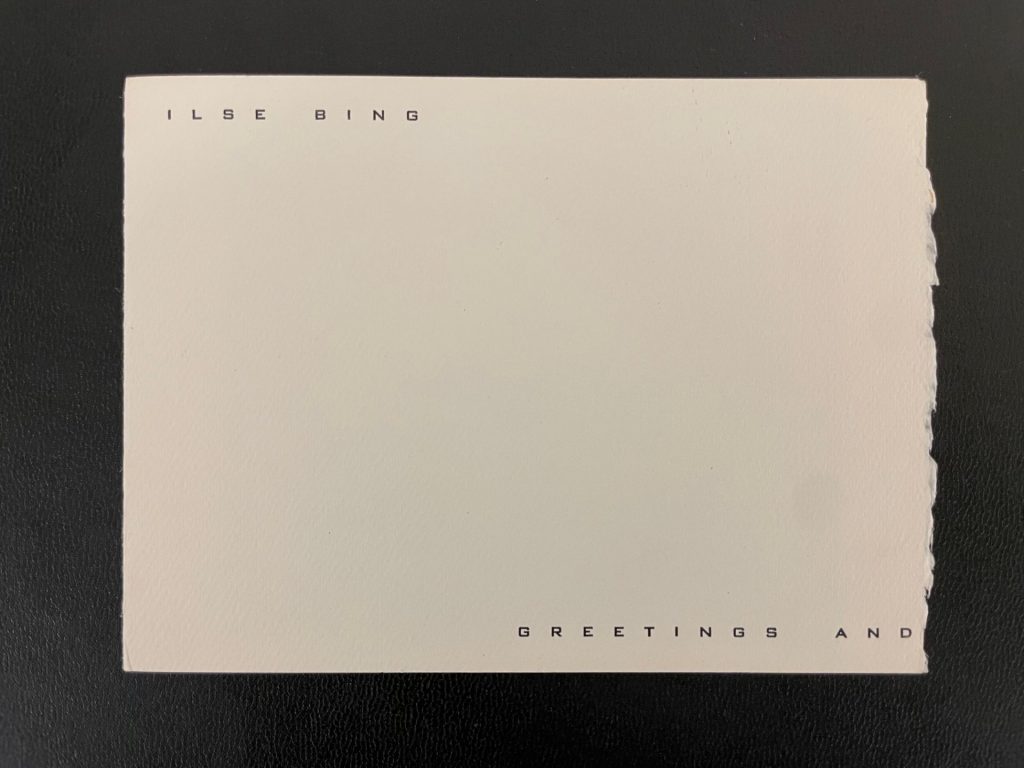 In 1983 for example, Bing sent a single-fold handmade paper card with a gelatin silver print photograph mounted inside. The outside of the card read “ILSE BING—GREETINGS AND”, and the interior photograph of a chalkboard drawing of an angel and stars floating over the word “WISHES” completed the holiday salutation. 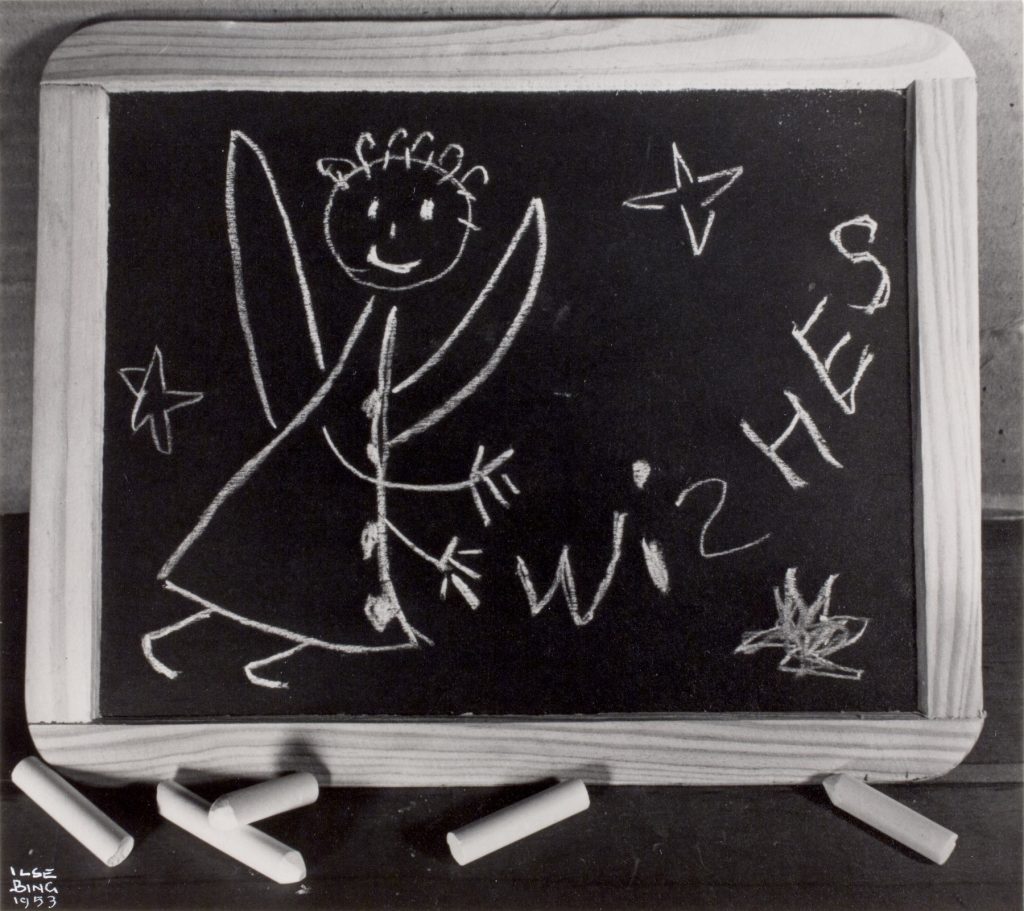 Bing’s card from 1981 was more somber, with a photograph of a discarded, needle-less tree lying in dirty snow next to a fire hydrant on the right side of the fold and a quote from Shakespeare printed on the left: “and this our life…finds tongues in trees, books in the running brooks, sermons in stones, and good in everything.” As the quote suggests, Bing’s tree has more to say than it might seem at first glance: It was, perhaps, decorated, admired, and maybe served as the backdrop for a family gathering with all the love and challenges such events can bring. Whatever it witnessed in its fulsome state, this little skeleton of a tree reminds us of the fleeting nature of life, and how quickly these holiday moments in particular, can come and go. 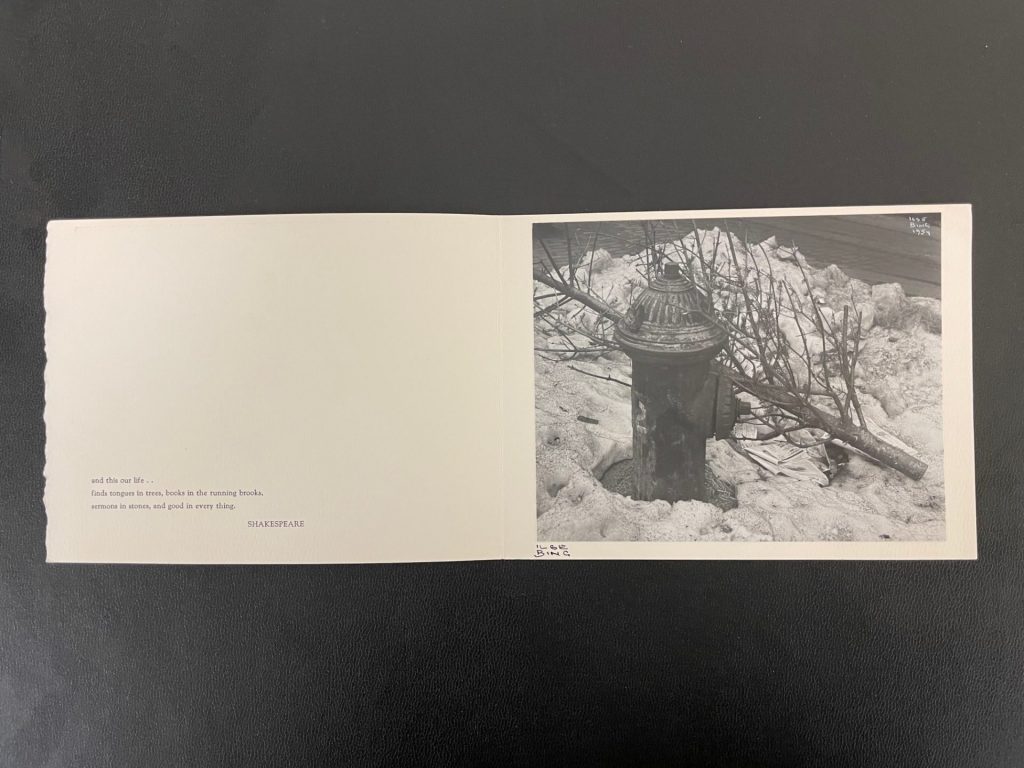 Bing was no stranger to hardships and challenges in her own life. As a Jewish woman born in Germany, she survived internment in a concentration camp in WWII and ultimately escaped to the United States. When she died in 1998, at the age of 98, she was widely regarded as a pioneer in hand-held camera photography. One of the first photographers to embrace motion blur, her thoughtful approach to street photography earned her the nickname “Queen of the Leica.” A master in fashion, advertising, landscape, and portrait photography, Ilse Bing’s beautiful holiday cards highlight yet another impressive and charming aspect of the artist’s career and they occupy an important place in NOMA’s collection and its history.