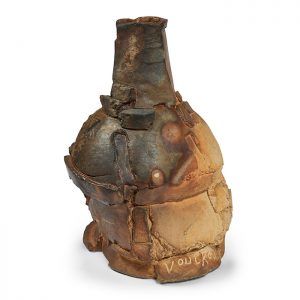 In May 2020, NOMA’s learning and engagement department established an “Art Inspires” short story competition that asked contestants to craft a fictional tale based on selections from the museum’s permanent collection of decorative arts. Samantha O’Connell won a prize for this story, titled “Big Ed,” and inspired by a work from ceramic sculptor Peter Voulkos titled Big Ed.

“God dammit!” Ed’s exasperated cry could be heard down the hall.

In the apartment two doors down Mary rolled over to her husband John.

“Mhm.” The dryness of John’s throat was audible.

“John. He can’t keep doing this. It’s every goddamn day.”

“I don’t know what you want me to do about it Mary.”

“John. Everyone can hear him down the hall. It’s absolutely ridiculous. Why on earth is this man turning damn near 7 locks back and forth just to get out the door? Huh?”

“Can you just do something about it for god’s sake. This man can’t keep waking us up at 5 in the morning. I don’t see how you don’t see a problem with that. You know what this is just another example of you not giving a shit about –”

“Will you please just go talk to him.”

John began to wiggle his toes.

Staring at Ed’s door, contemplating his own morning routine, John knocked twice, and the chorus of locks began to sing.

Ed’s own frame filled the one in which he was standing, causing John to not only notice his size but also the unsettling nonuniformity about him.

His nose was bent to left, and along with that his left eye sat slightly lower than his right. His shoulders were wide, which made the tilt in them ever more apparent, and his hands dangled at the end of his arms like two bowling balls waiting to be swung down the lane. Adding to the torque of his upper torso, his right leg appeared slightly longer than his left.

“Are you just going to stand there? I have to get moving.” Ed ushered John out of his way, with little care about why he came to his door in the first place.

John felt embarrassed for staring and followed timidly behind Ed.

“My name is John. I don’t think we’ve ever formally met, but I live down the hall…” John began jogging to keep up with Ed’s pace.

John waited for a response from Ed. Without receiving one, he continued. “Anyway… My wife and I… Well we hear you every morning when you’re leaving your place. And I know these locks can get jammed up…”

They had made it to the elevator.

“That button works pretty well I think you can just press it once.” John became distracted by Ed’s actions.

Ed’s mind came into focus. “Huh? What is this all about? The locks?”

“Um yea. My wife she can be a bit uptight about these things. But we do hear you in the morning and maybe you don’t notice, but you tend to yell when they get jammed up.”

“Oh well, maybe you get stuck or something, but you are shouting about it.”

“I need to unlock them in order. Sometimes I mess up.”

Stairs. I need to take the stairs.

John was startled by the sudden movement but continued to follow Ed down the stairs and out of their apartment complex.

“Where are you going?” John asked, forgetting the reason for his conversation with Ed.

“The river. I go every morning.”

Together, they sat on a bench located 25 feet from the river’s edge.

The silence between them quickly became drowned out by the sound of the water travelling downstream, washing over the riverbed and crashing at its edges.

“So, you come here every morning?” John’s curiosity began to sprout.

“Yeah. Normally I get here earlier, but today I was delayed.”

John chose not to be offended and continued the conversation.

“Why do you get here so early?”

“Couldn’t you sit later in the day?”

“Is there a particular reason for that?”

“Well, I’m just thinking if you have other time throughout the day you could come then. That way my wife could sleep in a bit.”

Ed ignored John, “You know, I think I come here for the reliability of it all. And yes, the stones move around; there are always different fish, but it is always so loud.”

They sat for the next twenty minutes apart, but together, listening only to the river.

After making their way back to the apartment complex, John followed Ed up to his door.

“Hey, well thanks for letting me come with you today.” John became distracted by a sculpture occupying Ed’s coffee table, “what’s that?”

While placing his keys next to the piece, “Oh. I got this at an auction a while back. It’s by Peter Voulkos. Funny enough it’s named after me.”

John realized he had never asked for Ed’s name. “You know, I never asked your name this morning. I’m sorry.”

“Huh. That’s funny. It’s quite a mismatched piece. Why do you like it?”

“It doesn’t make sense to me.”