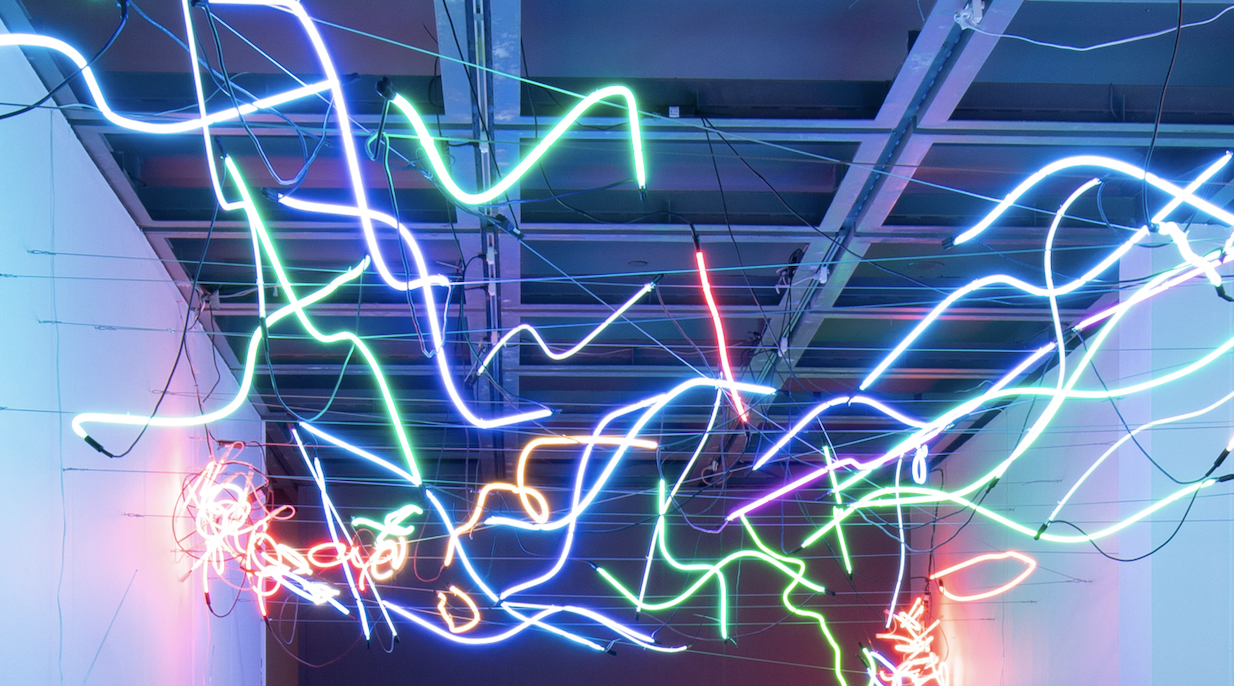 In celebration of the glowing neon in Keith Sonnier’s retrospective and the dazzling sequined Haitian Vodou flags created by Tina Girouard, sequin artists Edgar Jean-Louis & Georges Valris on display in the Great Hall, NOMA throws open the doors till midnight for Nuit Brilliante. Join us for an evening of live music, performances, gallery talks, dance demonstrations, and more!

Carl Joseph Williams, born in Uptown New Orleans in 1970, attended The New Orleans Center for Creative Art ( NOCCA) where he received his initial art training, followed by studies at the Atlanta College of Art. In Atlanta, Williams flourished in his craft, graduating in 1994 and producing solo exhibitions, participating in several group exhibitions and completing several public art projects. In 2013, Williams mounted a solo exhibition at the George Ohr Museum in Biloxi, Mississippi, and was a recipient of the Joan Mitchell NOLA Studio Artist Residence Program. He was also selected to participate in the 2014 State of the Art exhibition at the Crystal Bridges Museum of American Art in Bentonville, Arkansas. He collaborated with a team of artists to create an interactive work of art in NOMA’s Creative Corner that addresses cultural appropriation.

Kristina Kay Robinson is a writer, curator, and visual artist born and raised in New Orleans, Louisiana. Her written, visual, and curatorial work centers the intellectual geographies of Black, Afro-Indigenous, and diasporic peoples and interrogates the modern and ancient connections between world communities while examining the impact of globalization, militarism, and surveillance on society and their intersections with contemporary pop culture.

Chakra Dance Theatre  is committed to the preservation, presentation, and teaching of African Diaspora cultures. With an emphasis on Haitian Vodou, the the dance theatre strives to obliterate the negative connotations associated with Vodou and emphasize the beauty of a culture that began in Africa, travelled to Haiti, and landed in New Orleans.

Award-winning musician, filmmaker, and organizer, Cliff Notez’ art is a continuous exploration of self. Rooted in hip hop, his art tackles the political and the personal, exploring the intimate consequences of a society where black bodies are easily ignored, forgotten, or disregarded. His debut solo album “When the Sidewalk Ends” was released in 2017 and is available on Spotify and Apple Music. In 2018, Cliff Notez won the Boston Music Award for “New Artist of The Year.”

Win Butler (DJ Windows 98) is is a singer, songwriter, musician, multi-instrumentalist, and DJ. He is one of the co-founders of the Montreal-based indie rock band Arcade Fire.
Friday Nights at NOMA is supported in part by grant funds from the Azby Fund; Ruby K. Worner Charitable Trust; New Orleans Jazz & Heritage Festival and Foundation; and the Louisiana Division of the Arts, Office of Cultural Development, Department of Culture, Recreation and Tourism, in cooperation with the Louisiana State Arts Council.
+ Google Calendar+ iCal Export