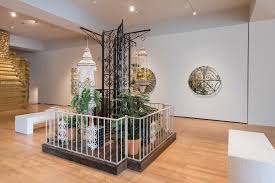 Friday Nights at NOMA opens the museum’s doors for many interesting activities throughout the year: live music, movies, children’s activities, and more. Regular admission prices apply—NOMA members are FREE—but there is no extra charge for programs or films. All galleries, the Museum Shop, and Café NOMA remain open till 9 pm.

Mykia Jovan is a vocalist and songwriter from New Orleans, Louisiana. Her unique voice has drawn natural comparisons to the great Billie Holiday and Erykah Badu, while her original compositions and live performances have established her as a singular voice in the modern progressive soul scene. Mykia was recently nominated for Best Emerging Artist in 2017 by Offbeat Magazine while her debut album, Elliyahu, was named a Top 50 Album of the Year by the publication. The lead single 16 Shots quickly received over 100,000 streams on Spotify and was included on one of the platform’s official playlists alongside artists Christian Scott aTunde Adjuah and Kamasi Washington among others.

Artist Carlos Rolón (b. 1970), previously known as Dzine, is the American-born son of Puerto Rican immigrants. His works question the concept of luxury and craft while exploring questions of identity, integration, and aspiration. NOMA is hosting his solo exhibition, Carlos Rolón: Outside/In through August 26, 2018. He attended Columbia College, Chicago, with a concentration in painting and drawing. Rolón has been recognized for his elaborately crafted paintings, ornate sculptures and works that come out of American, Latino, and uniquely based subcultures. The work often addresses his biography by melding memory and the imaginary with carefully crafted, hybrid works that are playfully situated between the contradictory worlds of conspicuous consumption and urban artifact. Rolón illuminates how the masculine can become delicate and the how the baroque can be minimal. The artist often channels this approach with site-specific installation work, vivid large-scale paintings and ornate sculptures in various materials expanding on ideas of self-reflection and imagined luxury. The works ultimately produce a hybrid language of social practice, painting and sculpture inviting the viewer to engage in discourse and discussion.